In this edition of the Muscle Car Time Machine, we turn the clock back to the year 1964. This is the year Beatlemania takes over America, the Rolling Stones release their first record, and the Lockheed SR-71 Blackbird spy plane makes its maiden flight. This is also a monumental year in muscle car history. This is the year Pontiac debuts the infamous GTO and Ford introduces the legendary Mustang. Both of these cars shattered sales expectations and created a frenzy for these two automotive icons that still exists today.

Today, we set the time machine clock to March 1, 1964. Our destination is Detroit, Michigan. We are in search of the latest issues of Car and Driver and Motor Trend magazines. Both of these periodicals feature road tests with the new Pontiac GTO. Normally, we would have looked for these issues on eBay but we could not find any that were in decent shape. Once we arrive, we set out to find a place where the magazines are sold. After walking a couple blocks

down Woodward Avenue, we find a small newsstand and walk inside. We find the owner behind the counter, reading the Detroit Times and drinking his morning coffee. He offers us a cup and asks if he can help us find anything. We mention the magazines we’re seeking and his eyes light up. He knows exactly why we want to find these issues. He goes on to tell us about a couple of GTO’s he has seen drag racing on Woodward. One raced against a Plymouth Barracuda and the other against a Ford Fairlane. The GTO won both races he declares with a grin. We drink our coffee with the owner and talk cars for a while. We then thank him for his hospitality and head back to our hotel. We are happy we were able to find copies of the magazines in new condition. 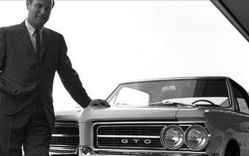 There’s an interesting story regarding the GTO article in Car and Driver. As it turns out, Pontiac supplied the magazine with a GTO that was equipped with a 370 horsepower Super Duty 421 engine tuned by Royal Pontiac. Royal was well known dealer in the Detroit area who specialized in tuning Pontiac engines. This engine had 45 more horses under the hood than the standard 389 cubic inch powerplant normally found in the GTO. On inspection, both engines looked identical to each other. Pontiac and Car and Driver also did not disclose that the test car turned a bearing during testing and was unable to be driven any further. That did not stop Car and Driver editor, David E.

Davis, Jr. from writing the cover story. He, along with Pontiac marketing executive Jim Wangers, crafted the article using exaggerated performance numbers just so the article could be written. They also did not come clean that they were not able to acquire a Ferrari 250 GTO to test against the Pontiac GTO. It would be years later before the truth was actually revealed.

Pontiac general manager John DeLorean, along with Wangers and chief engineer Pete Estes had accomplished what they set out to do. They transformed Pontiac from a drab brand to a performance powerhouse. Even with fixed performance numbers, the 1964 Goat was a sales success. Pontiac sold over 32,000 GTOs in 1964. This was far greater than the 5,000 they expected to sell. DeLorean and his cronies were also able to bend the rules set forth by General Motors regarding engines for the GTO. At the time, GM’s displacement limit for cars such as the Tempest and GTO was 330 cubic inches. By making the GTO an option package, they skirted past this ban. This would not be the last time rules were broken to sell or promote the GTO.

Next, we turn the time machine clock ahead to April 16, 1964. Our destination once again is Detroit, Michigan. It’s the day before the Mustang goes on sale. Ford runs commercials tonight showcasing the new Mustang on all three networks. The commercial’s tag line declares “coming April 17th…the unexpected…the new Ford Mustang.” During the commercial, a white coupe with a 289 cubic inch V8, stick shift,

and bucket seats is revealed. It causes quite a stir since there is no other car quite like it. This is where pony car madness gets its start. Even tonight’s episode of Hazel features Hazel, George, and Dorothy, and Harold going out to dinner in a Mustang. It just so happens, this was done as a special promotion by Ford who is a sponsor of

the show. After we finish watching Hazel, we’ve worked up quite an appetite. We decide to drop by the neighborhood Burger Chef and grab some burgers and fries. On the way, we stop by the local Safeway to get the latest copies of Time and Newsweek. It sure seems like we are buying lots of magazines on this trip. The Mustang is featured on the covers of both magazines with accompanying articles about the car. We want some souvenirs to take back to the present when we return. We can’t remember the last time a single car caused so much commotion upon its introduction.

The next day at the World’s Fair in Flushing Meadows, New York, Henry Ford II shows off the new Mustang to an enthusiastic crowd of spectators. It is also the day that customers stormed their Ford dealer and purchased an astounding 22,000 Mustangs. Lee Iacocca, Ford’s general manager, had to be proud. The car that he had only imagined a few years earlier had finally come to fruition. By the end of the year, over 400,000 Mustangs will have been sold. He would later get promoted to president of the company in October.

As we head back to the present, we realize just how pivotal 1964 is to muscle car history. The GTO and Mustang set a standard that was copied many times over by other manufacturers. However, nothing comes close to an original.