The 2015 Ford Mustang GT Premium is the latest addition to the Horsepower Garage. For 2015, the Mustang is all-new with fresh exterior styling, a revamped powertrain, and a few other goodies we’re anxious to try out. We took the Mustang out on the interstates as well as a few winding back roads to get a sense of what makes the new Mustang different from its predecessor. So, is the 2015 Ford Mustang GT all it’s cracked up to be? Stick around and find out. 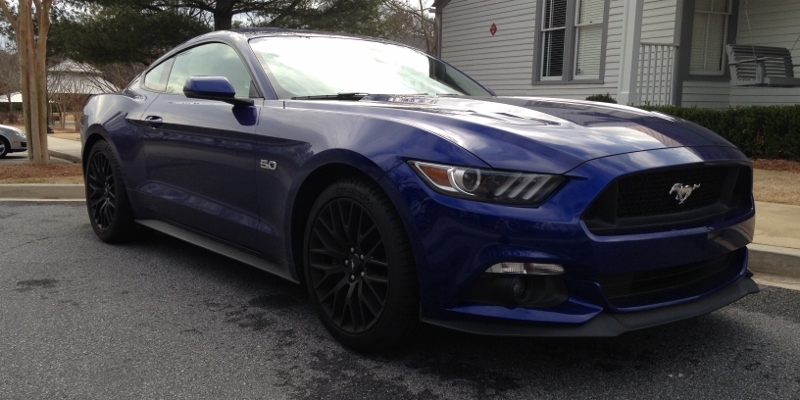 After we pick up the keys, we do a quick walkaround and check out several of the Mustang’s exterior features. The snake-eye HID projector headlamps are one of the first things that catches our eye. They exert a sinister look like a snake that’s coiled and ready to strike. The long, sculpted hood features vented air extractors and twin hood bulges that add to the Mustang’s aggressive styling. Off course, it wouldn’t be a Mustang without sequential rear LED turn signals. Another really cool feature on the new Mustang is the pony projection lamps. They shine the Mustang pony logo on the ground when entering and exiting the vehicle. 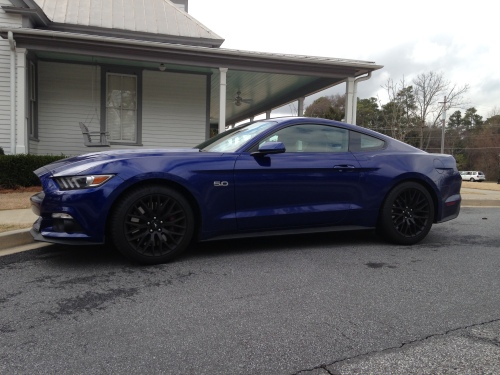 We took the Mustang out to one of our favorite back roads far from the city to see how it performed. With its long straightaways and hairpin curves, it’s a great place to test the performance characteristics of just about any car. One thing is for certain, the 5.0-liter V8 engine didn’t disappoint. This car wants to be driven…and driven hard! Throw the car in first, punch the gas, and the car speeds up to red line very quickly. There’s 435 horsepower and 400 lb-ft of torque at your beck and call whenever you want it. The car seems to launch best when we’d get up to 15 to 20 mph first and then stab the gas instead of flooring the accelerator from a dead stop. Our Mustang GT could go from 0 to 60 in a scant 4.5 seconds and dash the quarter mile in 13.3 seconds. This is with the help of the GT Performance Package which includes 19-inch Pirelli P Zero tires and a 3.73 Torsen rear axle. Our tester also came with the six-speed manual transmission. Shifts are precise but the clutch feels a bit stiff and heavy. When it’s time to bring everything to a halt, the six-piston Brembo brakes are up to the task. Our only complaint is with the exhaust. The sound is a bit subtle until you stomp on the gas. Part of the problem could be the interior is so quiet that it considerably muffles the roar. 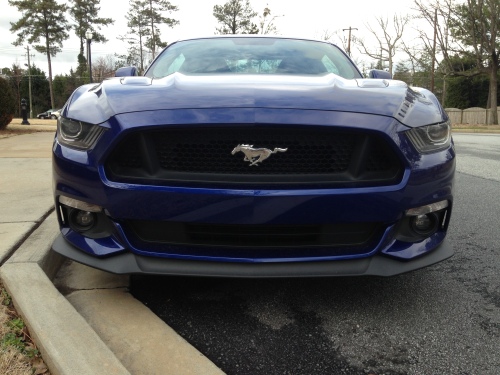 The big news for 2015 is the independent rear suspension. It’s a first for the Mustang, and man, does it ever add to the driving experience! First of all, ride quality is much better than the old solid rear axle setup. The IRS isn’t as jarring when driving over bumps and rough pavement like the old solid axle. Second, it handles much better when cornering than the outgoing setup. With the IRS, the Mustang also seems to fishtail less and you feel more in control than the 2014 Mustang GT we tested. 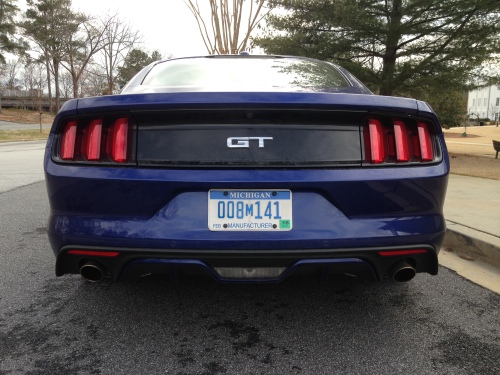 Another highlight of the Mustang GT is Selectable Drive Mode. This feature allows drivers to choose between several settings including Normal, Sport +, Track, and Snow/Wet mode. Normal is pretty self-explanatory so we won’t go there. Sport + provides more responsive steering and throttle response. Track gives seasoned drivers the ability to thrash the car a little harder around the track. Snow/Wet gives drivers more control on less than favorable driving conditions. We gravitated more to the Sport + setting because of tighter steering and quicker starts off the line. There’s also a switch for three selectable steering modes (Standard, Sport, and Comfort). Again, Sport + was our favorite based on its overall responsiveness. 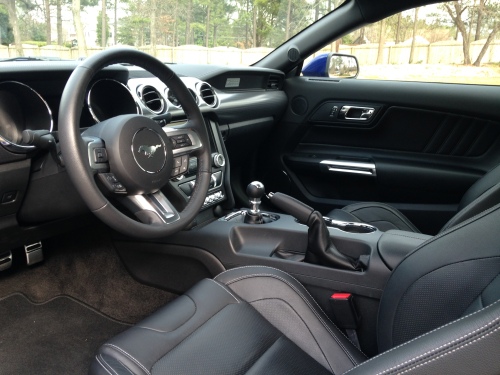 The interior of the 2015 Mustang is the best we’ve seen yet. Gone is the clutter and mass of buttons that filled the dashboard of the 2014 GT we drove a couple years ago. Controls for phone, navigation, entertainment, and climate can be accessed via touchscreen controls. Ford put a lot of thought into the new Mustang’s interior and the results speak for themselves. The retro styling isn’t overdone either. The dashboard and door panel’s styling, which harkens back to the 1960s, mixes well with modern touches such as the Engine Turn aluminum dash panels. Aircraft-inspired gauges with callouts such as Ground Speed and Revolutions Per Minute are reminiscent of those used in the P51 Mustang fighter plane. Since the seating position is slightly higher than the dashboard and door panels, you feel more in control and have a commanding view of the road. The optional Recaro leather seats look great but they’re a little narrow and not as comfortable as the standard leather seats. They’re also manually controlled and pricey at $1,595. We also enjoyed the Shaker Pro Audio system. The 12-speaker system with amplifier really kicks when playing our favorite Sirius XM stations. 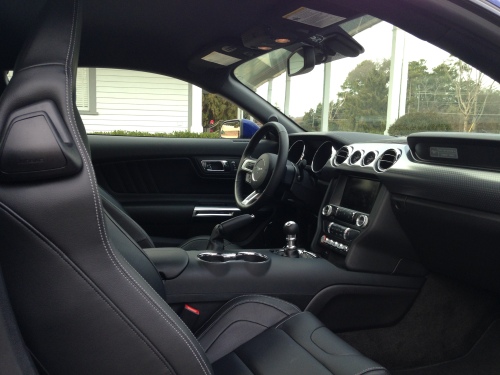 We did get a bit of sticker shock when we saw the price of our tester. At 45,885, our Mustang GT was a bit on the pricy side. Glancing at the window sticker, we see options we could do without such as adaptive cruise control, reverse park assist, voice activated navigation, and the aforementioned Recaro bucket seats. Getting rid of these features saves us almost $3,900 and lowers the price to $42,005. 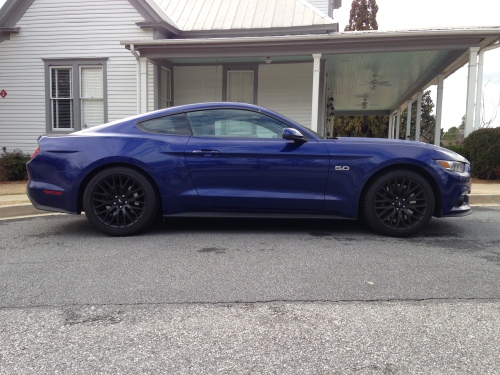 The 2015 Mustang GT is the best Mustang we’ve ever driven. Ford got it right and it shows with improvements to the interior, aggressive exterior styling, and its all-new, fully independent integral-link rear suspension. We had a blast driving this car and really hated to give it back on Monday morning. For us, this car seems to have set a new standard on how a pony car should look, handle, and perform. Hopefully, we’ll get a chance to try out another Mustang really soon.