Several crown jewels from the Brett Torino Collection will hit the auction block at Mecum’s Kissimmee auction this coming January. Torino, a Las Vegas land developer and philanthropist, is thinning the herd in his prized collection of some of the finest and rarest muscle cars ever created. This auction will be an opportunity for serious collectors to get hold of some of the scarcest muscle cars built during the classic muscle car era.

Brett’s collection of Detroit muscle is nothing short of fascinating. There’s not one, but two, Hemi ‘cuda convertibles. Two of General Motors’ class of 1969, the ZL1 Camaro and Pontiac Trans Am convertible, are also represented. And the Torino King Cobra is a history lesson from Ford’s days of trying to outdo the notorious Dodge and Plymouth wing cars. 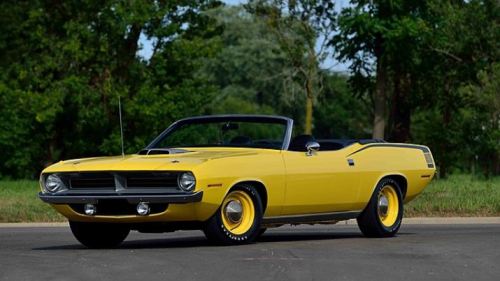 Hemi ‘cuda convertibles are about as rare as hen’s teeth. Brett’s pair represents two of the finest examples known to still exist. The 1970 model comes smothered in bright Lemon Twist yellow paint with black Hemi hockey stick striping. It’s one of only five Hemi ‘cuda convertibles to be equipped with a 4-speed manual. This 425 horsepower beauty also comes equipped with the Super Track Pack option along with power front disc brakes and 4.10 Sure Grip rear end.

Brett’s 1971 Hemi ‘cuda convertible is just as stunning in Sno-White paint with a black interior. This car was the very first 1971 Hemi ‘cuda convertible built with an automatic transmission. It’s interesting to see that the A727 TorqueFlite automatic has a column shifter, not a console shifter that is normally associated with most muscle cars. This car was also special ordered with equipment such as hood pins, 15×7-inch steel wheels, and AM radio with microphone and cassette.

Don’t let the plain plain Jane appearance fool you. This 1969 Chevrolet Camaro ZL1 is the muscle car world’s equivalent of a wolf in sheep’s clothing. It comes equipped with its original 427 engine and 4-speed manual transmission combo. It was restored in 2000 by supercar specialist Dan Tinnell. This big block behemoth is number 18 of 69 ZL1s built exclusively for the 1969 model year. This pony car antagonist also comes with documentation such as the dealer order sheet and original bill of sale.

Another extremely rare bird in Brett’s collection is this 1969 Pontiac Trans Am convertible. It is one of only eight built and is the only triple white convertible produced in 1969. This car was ordered new by Pontiac executive Tom Goad during his first year working at Pontiac. The WS4 Trans Am Performance and Appearance Package included features such as a 3-speed manual transmission with floor shifter, free-flowing dual exhaust, and Safe-T-Track differential. This rare beauty has been in Brett’s collection since 2006.

This 1970 Ford Torino King Cobra is one of only two known to still exist. The car was ordered by Ford in August 1969 as a special purpose vehicle. It’s powered by a 370 horsepower 429 Cobra Jet V8 coupled to a 3-speed automatic transmission. It’s unrestored with only 831 miles registering on the odometer. Experimental cars such as this one usually end up at the crusher. However, famed Trans Am racer Bud Moore rescued it from such a fate and kept the car for several decades at his home in Spartanburg, South Carolina. It was eventually sold to Ford collector Jacky Jones and then to Brett Torino in 2008.

The Mecum Kissimmee auction is held at Osceola Heritage Pack. It’s starts on January 15th and runs through the 24th. Go to mecum.com for all the details.