John Force will soon be burning up the drag strip in his new 2016 Chevrolet Camaro funny car. The NHRA champ will run his first race in the sixth-generation Camaro this coming weekend at the NHRA Kansas Nationals.

“I started my career in a Chevrolet and I couldn’t be more excited to put this new Camaro SS Funny Car on the track,” said Force. “With all the assistance from Chevrolet, it not only looks great, it’s designed to perform better than anything we’ve had before, with a shape that should help us get down the track quicker and with greater stability.”

To say Force’s new Chevy Camaro funny car is fast is quite an understatement. The 10,000 horsepower Camaro SS funny car can sprint from 0 to 330 mph in less than four seconds! That’s thanks to features such as an integrated front splitter that helps air move over the body to intensify downforce and blow-out panels that alleviate underbody pressure, helping keep the body intact in case of engine disaster. 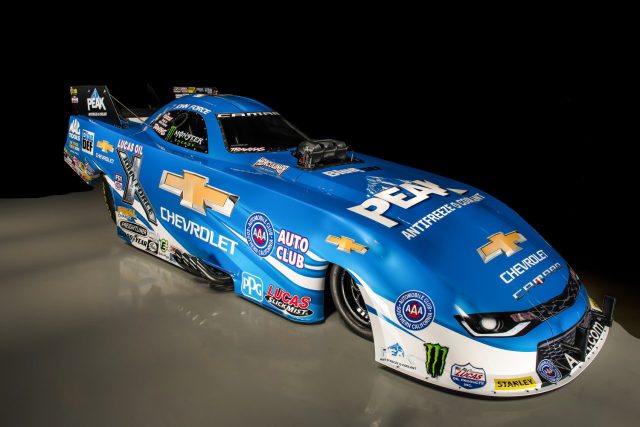 “The 2016 Camaro has been a great success in the showroom and Chevrolet is proud to contribute to its debut in NHRA’s Funny Car class,” said Jim Campbell, Chevrolet U.S. vice president of performance vehicles and motorsports. “It joins the 2016 COPO Camaro in the Sportsman classes, strengthening Chevrolet’s presence in drag racing, which dates back nearly 60 years.”

The NHRA Kansas Nationals runs this coming Friday, May 21st through Sunday, May 22nd.