The 1970 Dodge Challenger R/T is the center of attention in this edition of the Muscle Car Showcase. Beaten to the punch, late for the party, and right place at the wrong time are just a few expressions that define the Challenger’s entry into the fiercely competitive pony car market. It arrived five years after the Mustang’s introduction and was released at a time when the muscle car was coming under fire by Uncle Sam and the insurance companies. The 1970 Challenger was Dodge’s way of giving both entities the middle finger and coming out with its own pony car anyway. Let’s take a look and see what makes the 1970 Dodge Challenger R/T such an iconic muscle car.

“Dodge’s 440-cubic-inch engine in a pony car may not be mankind’s answer to world problems, but it’s liable to satisfy some yearnings.” Steve Kelly, Hot Rod Magazine, December 1969

The 1970 Dodge Challenger R/T was available with a wide variety of V8 engines and could be ordered as a hardtop or convertible. Standard equipment on the R/T included a Rallye instrument cluster with 8,000 rpm tach, heavy-duty suspension, and Rallye wheels. Other standard features on the R/T included a performance hood with dual scoops and a choice of longitudinal side stripes or bumblebee rear wraparound stripes.

Although similar in appearance to the Plymouth Barracuda, the Dodge Challenger is built on a longer, 110-inch wheelbase compared to the Barracuda’s 108-inch wheelbase. The Challenger also features a quad headlamp setup, full-length tail lamps, and a distinctively different profile from its ‘Cuda sibling. 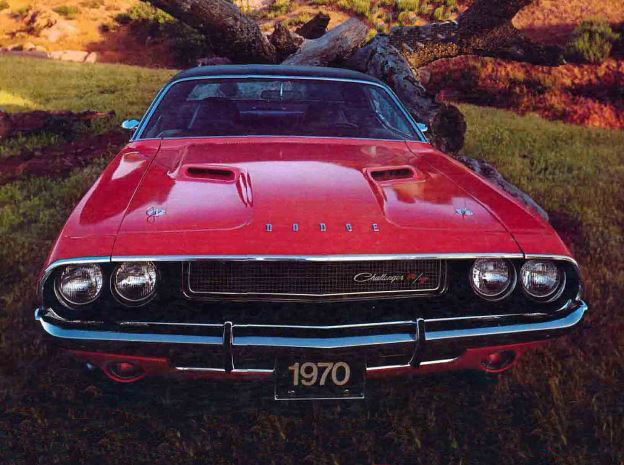 The standard engine in the 1970 Challenger R/T was the 383 cubic-inch Magnum V8. This engine came equipped with a single four-barrel carburetor, a 9.5:1 compression ratio, and a three-speed manual transmission. This powerplant churned out a respectable 335 horsepower and 425 lbs-ft of torque. Motor Trend tested the 383 for their November 1969 issue and achieved a 0 to 60 time of 7.8 seconds and ran the quarter mile in 15.7 seconds running 90 mph. Motor Trend stated “the 383, a dependable engine with good torque, makes for a good street machine, but don’t expect e.t.s in the 13.0 range. It isn’t happening.”

The next engine up the power scale is the 440 Magnum. This engine produces 375 horsepower and a whopping 480 lbs-ft of torque. This engine features a single Carter four-barrel carburetor, a 4.32 x 3.75 bore and stroke, and 9.7:1 compression ratio. And in the quarter mile, it’s 1.16 seconds faster than the 383. The standard transmission was a TorqueFlite automatic but buyers could opt for a four-speed manual with Hurst pistol-grip shifter and a Dana 60 rear axle. Other available features buyers could check off on the options list included power steering, disc brakes, and a really cool shaker hood scoop. If you wanted to dress up your Challenger ever further, there was an available SE package. This package came with highlights such as a vinyl top, leather seats, overhead interior console, and smaller rear window.

Reviewers state the 440 Six Pack is a good choice for those seeking a mixture of performance and road manners. Even more good news is that this engine choice was one-third the price of the Hemi. Car Life tested the 440 Six Pack and got a 0 to 60 time of 7.7 seconds and a quarter mile time of 14.64 seconds at 97.82 mph. Not bad for a car that supposedly had mechanical problems. Driving the 440 Six Pack was also known to get a driver very hot and bothered. That’s because air conditioning wasn’t available for this pavement pounder.

Mainly due to its $778 price tag, the 426 Hemi is the rarest model in the Challenger R/T lineup. That’s equivalent to $4,830 today and many buyers just weren’t willing to fork over that much cash. That doesn’t include the $142 or $235 Track Package you also had to purchase (depending on transmission) when opting for the Hemi. Nonetheless, this got you a cruiser capable of going from 0 to 60 in just under six seconds and capable of sprinting the quarter mile in 14.1 seconds. Not bad for a normally aspirated 3,850 pound car. However, the Hemi suffered from issues such as strong understeer, poor braking, and weight distribution. Almost 60 percent of the 426 Hemi Challenger’s weight is up front. It also weighed considerably more than a Mustang and was five inches wider than the Blue Oval’s pony car. 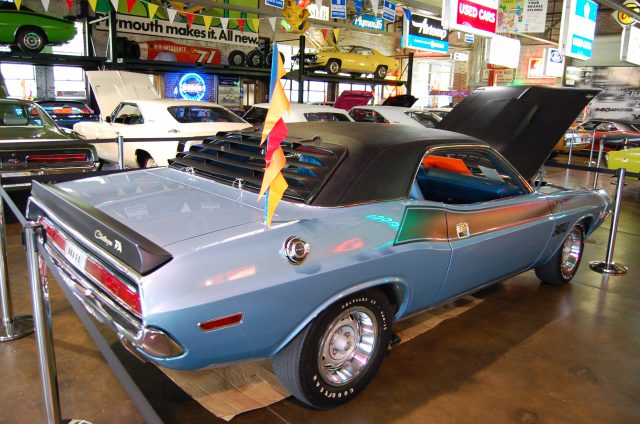 In order to be competitive in the Tran Am racing league, Dodge released the Challenger T/A. This track-ready coupe is easily identified by its black fiberglass hood, side exhaust system, and 340 Six Pack fender decals with a large T/A side stripe. Cars Magazine tested the T/A and came away impressed with its handling characteristics. The magazine stated its handling on a road course was “outta sight” and that the T/A was controllable and possesses great directional stability. The T/A is powered by a tri-carbed 340 V8 engine and drivers could choose between a TorqueFlite automatic or four-speed manual transmission. Dodge stated the T/A produced 290 horsepower although many enthusiasts will tell you it’s closer to 350 horsepower.

Fans of the 1970 Dodge Challenger T/A should really check out the drive-in cult classic Vanishing Point. This flick follows the misadventure of Kowalski as he delivers a white Challenger T/A from Denver to San Francisco. In his Benzadrine-induced high, he encounters several interesting characters in his quest to get the Challenger delivered in 15 hours. It definitely ranks up there with other muscle car classics such as Two Lane Blacktop and Smokey and the Bandit.

The 1970 Dodge Challenger R/T may just be the ultimate muscle car anachronism. It came out at a time when the muscle car was falling out of favor and its popularity was declining. It’s a good thing that didn’t stop the powers at Dodge one bit from releasing one of the coolest pony cars in its history. It’s certainly earned its place in Dodge’s muscle car royalty.