The great thing about the Los Angeles Auto Show is that it marks the beginning of auto show season. We’ve been counting the days to the show and anxious to get up close and personal with some of the hottest new and vintage muscle during media days at this year’s spectacle. This year’s show definitely didn’t disappoint! The Los Angeles Convention Center was abuzz with plenty of fresh muscle from the Big Three and other vendors. With so many great cars on display, there was something for everyone to see at this year’s show. Here are just a few of the great cars that were on display at the 2016 show.

Ford showed off this 2017 Mustang Fastback customized by CJ Pony Parts. The car starts out as an EcoBoost coupe and is transformed by CJ with a Stealth Gray paint job with Acid Green accents. Performance upgrades include Borla exhaust, Cobb front mount intercooler, and Niche 20-inch wheels with Michelin Super Sport tires. It looks quite fast just sitting still! 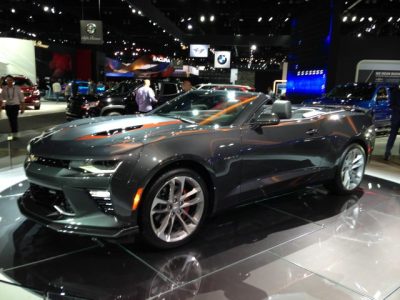 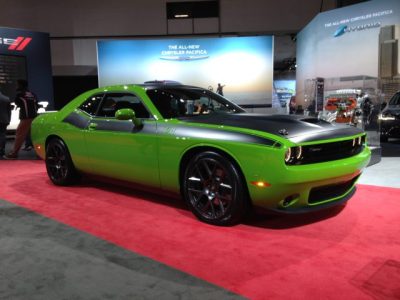 This 2017 Dodge Challenger T/A looks awesome in Sublime Green with a matte black hood and black side stripes. The 2017 T/A is a flashback to the original T/A which was a one-year only model from 1970. Buyers have two V8 options for the T/A including a naturally aspirated 5.7-liter and a 6.4-liter 392 Hemi engine. The T/A also has parts passed down from the Hellcat including cold-air intake and cat-back exhaust. 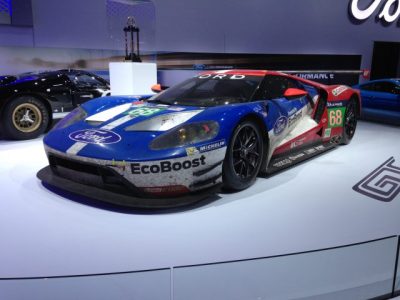 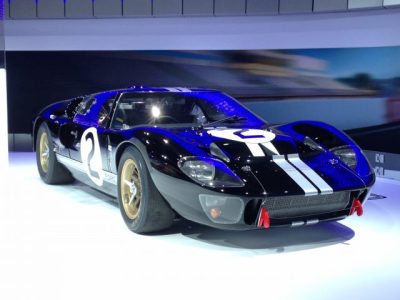 Past and present collide at the Ford GT carousel. First up is the winner of the 2016 24 Hours of LeMans in the GTE Pro class. Number 68 still sports all the dirt and grime it accumulated during the race. Next to Number 68 is one of the fabled GT40s that participated in the 1966 LeMans race. During this race, the Ford GT40 came in first, second, and third place beating out other legendary marques such as Ferrari. It was quite a finish and hard to believe that was 50 years ago! This beauty was on loan from RK Motors in Charlotte, North Carolina.

Chevrolet proudly displayed two of its hottest 2017 models. The Corvette Grand Sport was all patriotic in its blue paint with red and white accents and stripes. And with black wheels and black carbon fiber ground effects, this Corvette looks ready to hit the track. Chevrolet also showed off the 2017 Camaro ZL1. This is the fastest Camaro that Chevrolet has ever produced. Underneath the hood lies a 650 horsepower supercharged LT4 V8. This snarling red devil is quite intimidating!

Dodge brought back another blast from the past with the Charger Daytona. And just like the Challenger T/A, it will be available with either a 5.7-liter or 6.4-liter Hemi V8. These two also show off their retro Yellow Jacket and Go Mango color schemes. They look quite flashy underneath the bright lights at the show. One thing is for certain, we always get quite an eyeful from Dodge at the auto shows and this year’s L.A. show was no exception.

Cadillac’s V-Series is always an attention getter for us at the shows. Who would have thought 20 years ago that Cadillac would build some of the finest muscle cars? This CTS-V sedan spews an amazing 640 horsepower and can race from 0 to 60 in only 3.7 seconds. Its younger sibling, this ATS-V coupe, is no slouch either. It cranks out 464 horsepower from a twin-turbo V6. Both look quite formidable in their stealthy paint jobs and big wheel and tire combos.

This Dodge Charger Hellcat is one eye-catcher in its Redline Red paint. Underneath that bulging hood is a supercharged 6.2-liter Hemi V8 with 707 tire-shredding horsepower. Not many other cars on the show floor, even exotics, have that amount of sheer horsepower. If only we could get the keys and take this thing for a joyride. 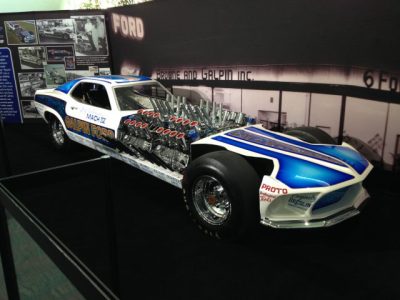 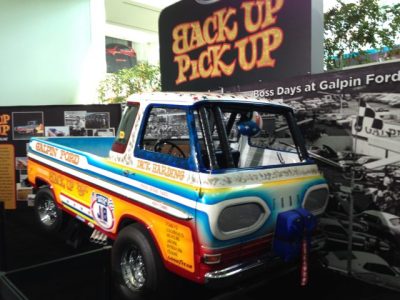 Galpin Motors, one of Los Angeles’ premier car dealers, always has some cool customs and vintage showcars on display at the L.A. Auto Show. One of this year’s attractions was the Mach IV. This four-engine Mustang drag car was a popular sight back in the late ‘60s and early ‘70s. Another radical custom was the Back Up Pick Up. This replica of the 1965 Ford Econoline is just like the one that could hit 120 mph while going backwards. This must have been a site when it was hitting the drag strips over 45 years ago! 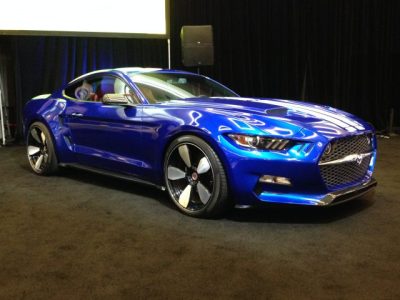 Galpin Motors also presented two very cool Mustangs. First up is the Galpin Rocket. This pony was created by renowned car designer Henrik Fisker and Galpin Motors and features a hexagonal carbon fiber grille, custom aero skirts, and custom wheels. And with 725 horsepower, it has the power to back up its aggressive styling. Galpin also brought a blast from the past with this 1967 Ford Mustang Rumbleseat. It’s one of only two known 1967 Rumbleseats to have been created.

The Los Angeles Auto Show was one of the best we’ve attended in a while. We can’t wait for the upcoming show in Detroit this coming January.