The 2005-2006 Ford GT is the star in this edition of Muscle Car Milestones. This modern-day interpretation of Ford’s original supercar was created using several innovative design features and state-of-the-art technology to create a 21st century marvel worthy of the GT nameplate. At the time of the Ford GT’s second chance at life, it had been over 35 years since a trio of Ford GT40s finished first, second, and third in the 1966 24 Hours of LeMans. That day, Ford proved it could take on the world’s best supercars and beat them at their own game. Could lightning strike twice? Let’s see what makes the 2005-2006 Ford GT more than just a remake of the original.

“It’s ironic, that in the 1960s Ford brought out the fabled Ford GT racer to dominate Ferrari on the premier race circuits of the world, and that in the not-too-distant future, the Ford GT will return to outgun the Ferrari once again, but this time on the streets of America.” John Coletti, Director of Ford Special Vehicle Team Programs 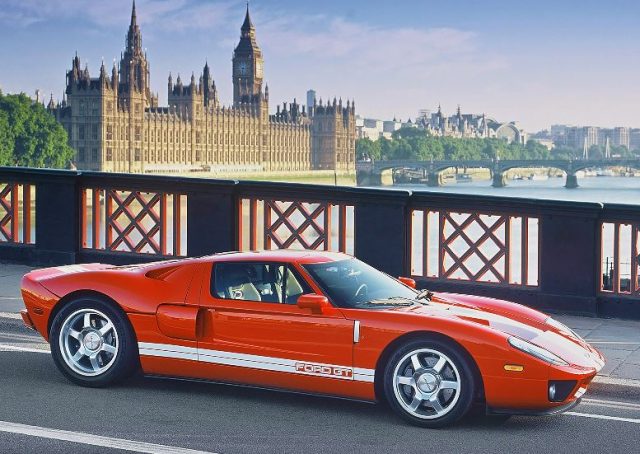 What stunned the crowd at the 2002 North American International Auto Show became a reality shortly thereafter. Just 45 days after showing off the GT40 concept, Ford revealed that a production version was in the works. Fast forward 18 months later and Ford had three production versions of the GT ready once again to take on the likes of Ferrari and Porsche, and most importantly, celebrate Ford’s 100th anniversary. But one question remains — does the new GT have what it takes to triumph once again over its competition from across the pond? Let’s find out.

To see what makes the 2005-2006 Ford GT unique, you first have to see what makes it different from its predecessor. The new GT may look like the original but that’s where the similarities end. The new GT is a little over 18 inches longer and nearly four inches taller than the original. The GT features super-plastic-formed aluminum body panels, roll-bonded floor panels, and a “ship in a bottle” gas tank. The new GT also features a chassis with unequal-length control arms and coil-over spring-damper units that contribute to its low profile.

Whereas the original GT was more at home on the race track, the new GT was designed for the street. One of the biggest challenges designers faced was creating an interior for the GT. The original GT consisted of nothing more than bare necessities such as a steering wheel, gauges, and a couple crude seats. After all, it was a race car and not a boulevard cruiser. With that in mind, Ford crafted an interior that mimics the original’s look and feel but blends functionality and some creature comforts into the mix. Upon entry, the driver is welcomed by ventilated bucket seats made from carbon-fiber and fitted with leather. The instrument panel features aluminum bezeled analog gauges with a king-size tachometer placed in the middle. Toggle switches, a throwback from the original GT, control basic functions such as headlights, fog lamps, and windshield wipers. Looking through the rear view, the driver not only sees the competition but gets a glimpse of the top of the engine that’s literally inches away. 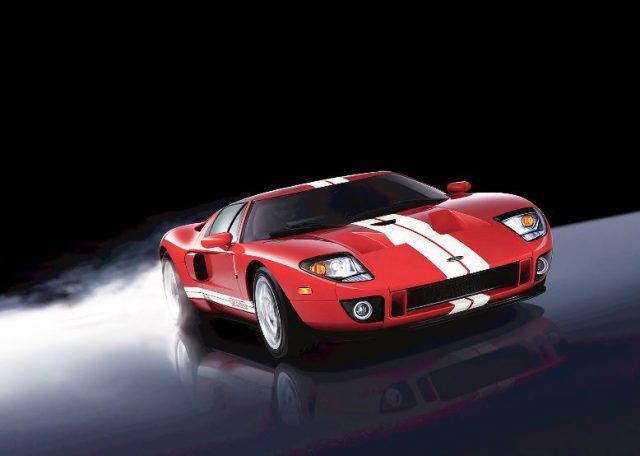 The heart of the Ford GT is a 5.4-liter V8 attached to an Eaton supercharger. This combination creates 550 horsepower and 500 foot-pounds of torque. Interestingly enough, maximum torque is realized at a mere 3,750 rpm. All this energy is channeled through a Ricardo six-speed limited-slip transaxle. Bringing the beast to a stop comes courtesy of four-piston Brembo calipers with cross-drilled and vented discs. This setup includes massive 14-inch discs up front and 13.2-inch discs on the rear. 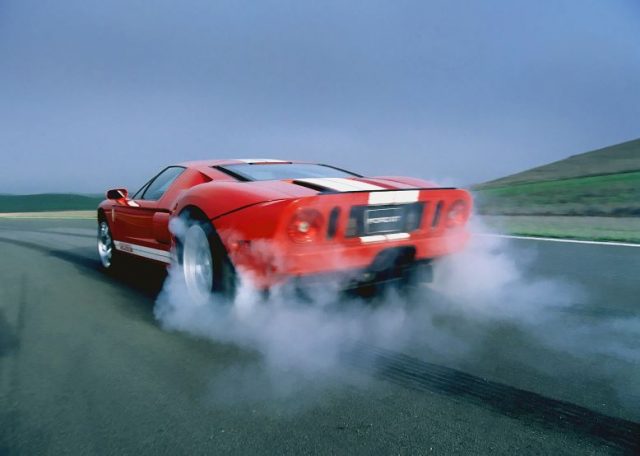 Of course comparisons between the GT and exotics from the prancing horse brand were going to be made. After the beating Ford bestowed on Ferrari during the 1966 24 Hours of LeMans race, the feud still lingers between these two rivals. Motor Trend pitted the Ford GT against the Ferrari F430 F1 back in June 2005. The GT beat the F430 from 0 to 60 by 0.2 seconds and was faster in the quarter mile by 0.3 seconds. Granted, those numbers aren’t staggering but they are proof that Ford built a supercar that can still take on Ferrari and beat them. This time, however, the dominance is on the street and not the race track. Adding insult to injury, the GT is roughly $50,000 cheaper than the F430.

Not much changed for the 2006 model year. Tungsten Gray replaced silver and a Heritage Livery Package was introduced. This package features an Epic Orange on Heritage Blue paint scheme similar to the GT40s that wore the Gulf Oil colors in the late 1960s. The package includes four white roundels on the hood, doors, and rear hatch so drivers can apply their own personal number.

Supercar, legendary, and triumphant are just a few words that describe the original Ford GT. The same can be said for the 2005-2006 Ford GT. Just like the original, it was built to take on the likes of Ferrari and Porsche and prove that America can produce a world-class exotic car. During its brief production run, the Ford GT may have been a throwback to the 1960s era racer but it also showcased Ford’s 21st century ingenuity and technology. The results speak for themselves.