The Pontiac GTO is considered by many to be the car that started the muscle car revolution in the early 1960s. The GTO was the brainchild of Pontiac madmen John DeLorean, Russ Gee, and Bill Collins. Their premise was simple -- create a budget-friendly muscle car that would appeal to the younger, performance-oriented enthusiast. Their gamble paid off better than they ever imagined. The Pontiac GTO created a firestorm that set the standard for what a muscle car can and should be. During its initial 11-year run, few cars had the mystique, street credibility, and appeal as the Pontiac GTO.

To fully understand what made the GTO great, you first have to get to know a little about its creator. John DeLorean was not your typical automotive executive. He joined General Motors in 1956 as a director and by 1961, had been promoted to division chief engineer. After helping thrust Pontiac to the number three sales position in the country, he was promoted to general manager. DeLorean had a reputation for being a maverick. He solidified his non-conformist attitude by dating famous models, smoozing with famous celebrities, and living the good life. His rebellious attitude also created friction with other top GM brass. Simply put, without his cavalier attitude, a car like the GTO may have never existed.

The 1964 Pontiac GTO was a car that literally broke all the rules. That may sound cliché but General Motors had a self-imposed ban on placing engines larger than 330 cubic-inches in the A-body. However, by making the GTO an option package for the Tempest, DeLorean was able to bypass this restriction and slip the GTO in under the radar of the pesky GM bigwigs.

From its inception, the GTO stirred up controversy. The March 1964 issue of Car and Driver is a perfect example. The Pontiac GTO was to be pitted against the Ferrari GTO in a clash of the titans muscle car shootout. As it turns out, Pontiac supplied the magazine with a GTO that was equipped with a 370 horsepower Super Duty 421 engine tuned by Royal Pontiac. Royal was a well-known dealer in the Detroit area who specialized in tuning Pontiac engines. This engine had 45 more horses under the hood than the standard 389 cubic-inch powerplant normally found in the GTO. On inspection, both engines looked identical to each other. Pontiac and Car and Driver also did not disclose that the test car turned a bearing during testing and was unable to be driven any further. That did not stop Car and Driver editor David E. Davis, Jr. from writing the cover story. He, along with Pontiac marketing executive Jim Wangers, crafted the article using exaggerated performance numbers just so the article could be written. They also did not come clean that they were not able to acquire a Ferrari 250 GTO to test against the Pontiac GTO. It would be 30 years later before the truth was actually revealed. 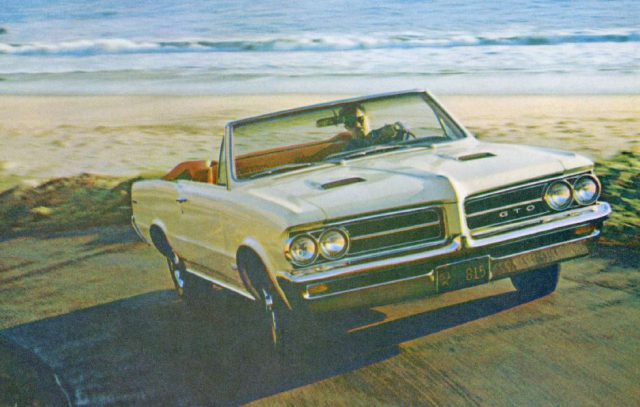 The pencil pushers at General Motors didn’t have much faith in the GTO. They didn’t believe the GTO would be a hit and insisted on a production run not to exceed 5,000 units. Their short sided conjecture totally missed the mark. By the end of the 1964 model year, Pontiac sold just over 32,000 GTOs.

The GTO was back for 1965 with updated styling and slightly more power under the hood. The GTO’s makeover consisted of a restyled grille, more prominent GTO badging, and three inches added to its overall length. The hood scoop might be fake but performance under the hood wasn’t. Car Life discovered the GTO with the tri-power 389 cubic-inch V8 was capable of 0 to 60 times of 5.8 seconds and could run the quarter mile in 14.5 seconds.

The term “one size fits all” certainly doesn’t describe the 1965 GTO. Drivers could order a wide range of performance equipment to customize their driving experience. A three-speed manual transmission was standard with the option of a four-speed manual or a two-speed automatic. Wheels could be ordered with deluxe wheel covers or custom spinner covers. Steel wheels with brake cooling slots were also available. Dressing up the interior was also a snap with an available custom sports steering wheel and instrumentation featuring a tachometer, ammeter, water temperature, and oil pressure gauges. 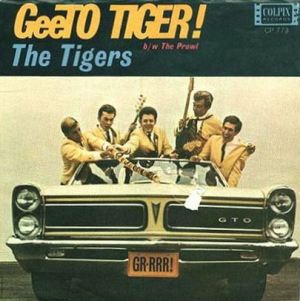 GTO fever had spread across the country and the widespread epidemic had started to take its toll. GTO sales doubled with roughly 75,000 cars being snapped up by loyal GTO devotees. By now, the marketing department at GM was churning out advertisements for the GTO almost as fast as the GTO itself. “The Tiger” was a nickname given to the GTO by Pontiac and big cats were frequently used in GTO marketing and advertising. Even music about the GTO was available from Pontiac dealers and the local record store.

“There is only one GTO. Never forget that. There are a lot of pretenders around. There always are in the wake of a winner.” – 1966 Pontiac GTO brochure quote

The GTO was no longer an option package for the Tempest. It became a separate model for the 1966 model year. It was also slightly restyled with a “Coke” bottle shape and engine options from the previous year were carried over. However, the tri-power 389 was dropped midway through the model year after General Motors banned the 3-carb setup on all cars except the Chevrolet Corvette. It was replaced with the XS code 389 rated at 360 horsepower. The GTO was still available as a coupe, hardtop, and convertible.

By now, the aftermarket had gotten in on the GTO craze. Companies like Royal Pontiac offered the Royal Bobcat engine package which consisted of a carburetor jetting package, distributor curve kit, and special hydraulic lifter rev kit.

Pontiac was aggressively marketing the GTO. Advertising by now portrayed the GTO as a lifestyle car. In other words, if you wanted to be one of the cool kids, you had to drive a GTO. This was also the last year tigers were used in GTO marketing campaigns. Other companies created products to cash in on the country’s obsession with the GTO. Thom McAn created a special shoe with a heel and sole that was made to grip the accelerator and brake pedals of the GTO. Model Products Corp created 1/25 scale models of the GeeTo Tiger.

Almost 97,000 GTOs rolled off the assembly line in 1966. This number represents the greatest number of GTOs produced in a single model year. Even though sales were never quite this lofty again, the party was just getting started. 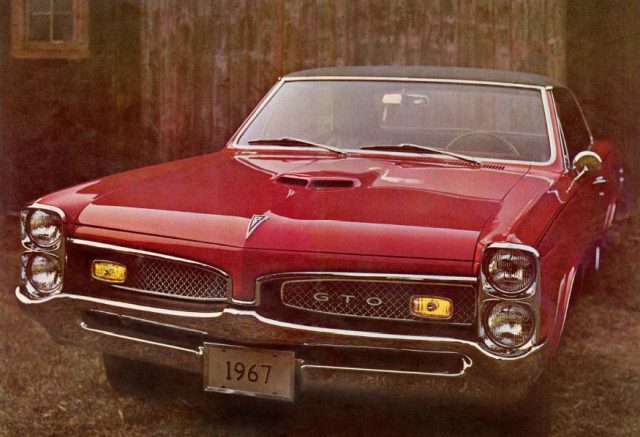 “Pontiac GTO. The ultimate driving machine. Made for people who know what that means. Others are excused  – 1967 Pontiac GTO advertisement

1967 ushered in several changes for the GTO. Most notable on the exterior was a new wire-like grille and four-lens tail lamps out back. Under the hood, drivers no longer found the 389 cubic-inch V8 from last year. In its place was a new 400 cubic-inch V8 with 335 horsepower. A Quadra-Power 400 with 360 horsepower was optional for the extremist. A puny 255 horsepower version of the 400 was available for your grandmother.

Even without a tri-power option, the GTO was still a formidable performer. With the Ram Air 400 and a three-speed automatic, Car Life was able to get the GTO to sprint from 0 to 60 in 6.1 seconds and run the quarter in 14.5 seconds at 102 mph. Car Life praised the 1967 GTO for its performance, handling, and equipment such as brakes and power steering. In fact, the word “supercar” was thrown around several times in the article. Factors scoring low on the scorecard included ride quality and engine noise level. 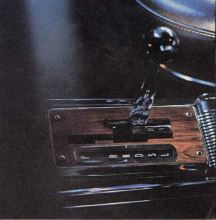 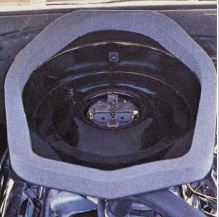 Some notable options for 1967 include a hood-mounted tachometer, Ram Air induction, and Hurst quadrant shifter. This slotted shifter was a unique feature when you ordered the floor-mounted three-speed Turbo Hydra-Matic transmission. In the left slot, it worked like a typical shifter. For manual shift control, the driver locked the shifter in the right slot. It’s perfect for those stoplight drag races on Saturday night.

1967 marked the end of the first generation GTO. In four short model years, the Gran Turismo Omologato had set a standard on what a muscle car can and should be. Copycats by other car makers came along but one thing was clear. There was only one GTO!

There’s so much more to the Pontiac GTO story. Changes, both good and bad, for the GTO were on the horizon. Stay tuned for part two where we’ll explore the GTO’s second generation and its impact on the muscle car scene.