Horsepower Memories was on hand during the Smokey and the Bandit 40th Anniversary Festival in Jonesboro, Georgia this past June. The city of Jonesboro teamed up with the Burt Reynolds Institute, Restore a Muscle Car, The Bandit Run, and the Snowman’s Run to host this year’s event. Jonesboro was one of the main filming locations of the movie and a great place to hold the event. There was plenty to see and do including a Burt Reynolds look-a-like contest and a recreation of the bridge jump held at Atlanta Motor Speedway.

Part of the festival included a car show featuring several Bandit-era Pontiac Trans Ams, police cars, and replicas of the Snowman’s Kenworth. There was even a Friday night showing of the movie at Lee Street Park. At times during the event, the skies opened up and poured rain but this didn’t keep the diehard fans away. Check out several of the great things visitors got to see at this year’s show. 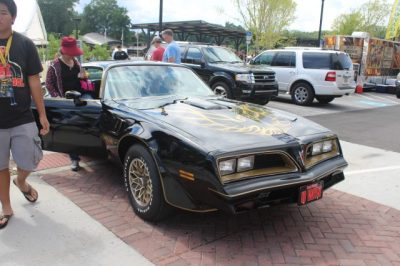 Dream Giveaway showed off their 1977 Pontiac Trans Am Special Edition. This black and gold Trans Am is equipped with a 400 cubic-inch engine mated to a Turbo 350 automatic transmission. Show goers could get up close and personal and even enter the contest for the upcoming giveaway. This beauty looks as good as the day it rolled off the assembly line. 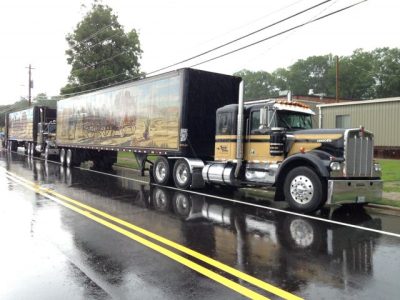 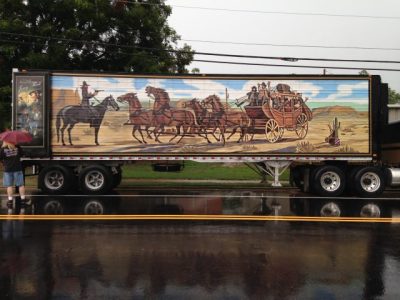 One of our favorite attractions at the show was the Kenworth replicas. These two W900 conventionals were painted just like the truck used in the movie. And what Bandit truck is complete without the trailer with the painted mural on the side? The only thing these trucks were missing was the Snowman and Fred.

No Bandit festival is complete without the streets filled with black Trans Ams. There were several on display just like the Bandit’s. Even a few other generations were out and about for spectators to see. The inclement weather that started off the day wasn’t enough to discourage these owners from showing off these beauties.

There were even a few police cars like those used in the movie. This brown LeMans looks just like Sheriff Buford T. Justice’s patrol car from Montague County, Texas. Across the street was this Plymouth Fury dressed up like the Mississippi Highway Safety Patrol.

This is the Trans Am that caught the attention of Burt Reynolds and Hal Needham and convinced them they had to have it for the movie. When Burt and Hal saw this very Trans Am in the 1977 Trans Am brochure, they knew they had found their “Bandit”. This car is actually a 1976 model with a 1977 front end. The story goes that Pontiac needed a car for the 1977 brochure but no 1977 Trans Ams had been created yet. A 1976 Limited Edition was plucked from the press fleet and fitted with a 1977 front clip. After the photo shoot, the car’s 1976 front end was reinstalled and later sold to a customer in California.

A few unexpected surprises were on display during the show. Check out this Cadillac Eldorado coupe just like Big Enos Burdette’s. This car was as huge as Big Enos himself! It smelled a little like clam chowder when we walked by. This Volkswagen Beetle proves that someone has a great sense of humor. It was painted just like the Bandit’s Trans Am. It even has a “screaming chicken” decal on the hood and gold snowflake wheels. Someone also painted this Polaris Slingshot in Bandit Trans Am colors. This has to be one of the coolest Slingshots we’ve ever seen and looked really cool parked next to the Bandit Trans Ams.

Restore a Muscle Car brought out one of Burt Reynolds’ personally owned Bandit Trans Ams. Restore a Muscle Car is one of the country’s premier automotive restoration facilities and their work is second to none. We couldn’t help but stop and admire this beautiful Trans Am they brought to the show. It looked absolutely flawless.

There was no better place to celebrate the 40th anniversary of Smokey and the Bandit than Jonesboro, Georgia. So much of the movie was filmed here and the town looks almost the same as it did back then. It’s also hard to believe Smokey and the Bandit rolled into theaters and drive-ins 40 years ago. It was one of the biggest films to hit movie screens in 1977. If you’ve never seen the movie, you should grab a copy and get ready for an hour and a half thrill ride you’ll never forget.

Check out the photo gallery below for other pictures from the show.