Years before multiplex theaters and IMAX cinemas, there was this thing called the drive-in movie theater. You pulled up to the gate, paid for your tickets, and then found a parking spot with a good view of the movie screen. There was no Dolby digital surround sound like you experience in today’s theaters. Sound was courtesy of a metal speaker that had more snap, crackle, and pop than a box of Rice Krispies. The first drive-in opened up on Crescent Boulevard in Camden, New Jersey back in 1933. At the height of their popularity in the 1950s and 1960s, there were approximate 4,000 drive-ins spread across the country. Today, roughly 350 still exist.

Some of the best drive-in movie flicks were those that centered around great muscle cars. Nothing beats the feeling of sitting out under the stars watching movies while filling up on soda, popcorn, and candy from the concession stand. Stay with us as we turn back the hands of time and look back at some great muscle car classics from the drive-in movie era.

This coming of age story features an all-star cast including Harrison Ford, Ron Howard, and Richard Dreyfuss. Set in Modesto, California in 1962, the movie tells the story of several teenagers and their exploits over the course of a long, summer night. Wolfman Jack also stars as the shadowy radio DJ heard throughout the movie and Suzanne Somers stars as the mysterious blonde driver behind the wheel of the 1956 Ford Thunderbird. George Lucus, creator of the popular Star Wars movie franchise, directed and co-wrote the movie.

The 1958 Chevrolet Impala that Ron Howard’s character drove in the movie was sold shortly before the movie was released. The car was advertised in the San Francisco Chronicle, along with several other movie cars that were available in an upcoming auction. The car was purchased by a 17-year old high school senior for $285. In recent years, the car has come up for auction with an estimated price tag between $800,000 and $1.2 million dollars. 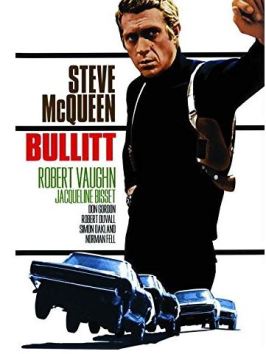 Steve McQueen stars as Lieutenant Frank Bullitt in this police drama centered in San Francisco. The movie also stars Robert Vaughn, Jacqueline Bissett, and Robert Duvall. The story centers around Bullitt and his team protecting an informant who plans to testify against the mob.

The movie is best known for its 10 minute, 53 second car chase through the streets of San Francisco. Bullitt’s 1968 Ford Mustang GT chases two mob hitmen in their 1968 Dodge Charger R/T through the city’s Russian Hill/North Beach area. The chase ends with the hitmen crashing into a gas station in Brisbane, resulting in a massive explosion. Due to middling film editing, the Charger loses at least six hubcaps during the pursuit. Two Mustang GTs were used in the movie. The hero car has changed hands a few times over the years and now belongs to a private individual. The stunt car, which hadn’t been seen in decades, was recently found rotting away in a junkyard in Mexico.

Peter Fonda, Adam Roarke, and Susan George star in this action-packed movie classic. Low on cash, aspiring NASCAR driver Larry Rayder and mechanic Derek Sommers rob a grocery store in order to get money to buy a race car. As Larry and Derek make their escape, Larry’s girlfriend tags along for the ride. The trio make their getaway in a 1966 Chevrolet Impala but later commandeer a 1969 Dodge Charger R/T from a local flea market. They are relentlessly pursued by several deputies in Dodge Polaras and Sheriff Franklin, along with his pilot, by helicopter. Some of the best action scenes involve a chase between the Charger and the sheriff’s helicopter through a walnut grove. Just when the threesome think they’ve made their getaway, the unexpected happens.

H.B. Halicki not only stars but wrote, directed, and produced this movie. The plot revolves around a group of car thieves and the 48 cars they must steal in a short amount of time. Halicki’s character, Maindrian Pace, makes a deal with a South American drug dealer for $400,000 in exchange for the 48 cars. Most of the cars are a cinch to steal, but the one car that proves troublesome is a 1971 Ford Mustang Sportroof. Pace winds up stealing four Mustangs, which he dubs as Eleanor, before he gets one that hasn’t been banged-up or destroyed. This film is renowned for its 40-minute car chase in which 93 cars are wrecked.

Nicolas Cage and Angelina Jolie star in the 2000 remake. Cage stars as Memphis Raines, a retired car thief, whose brother botches a plan to steal fifty cars for a British gangster. The gangster kidnaps Memphis’ brother and threatens to kill him due to screwing up the heist. Memphis makes a deal with the gangster to get the cars in exchange for his brother’s freedom. He’s given 72 hours to make it happen. Just like the original movie, the only car that gives Memphis a problem stealing is a 1967 Shelby Mustang. 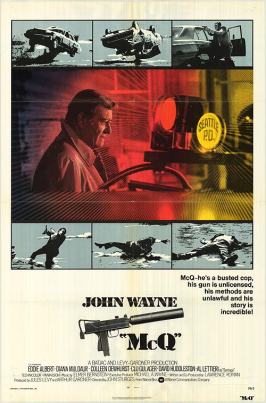 John Wayne stars as police detective Lon “McQ” McHugh in this police drama centered in Seattle. After the shooting death of his partner, McQ goes after Manny Santiago. McQ believes Santiago, the local drug dealer, is responsible for the crime. McQ and his partner had been investigating Santiago for some time. When he finds Santiago, McQ violently beats him. After the incident, McQ is confined to desk duty by his captain and soon resigns. From there, he continues to investigate his partner’s death on his own. He learns that Santiago and his henchmen are planning to steal drugs held in a police evidence vault. The crooks make off with the drugs and escape. McQ goes after Santiago and his men by breaking into Santiago’s office. He is caught by the crooks and learns that the stolen drugs were actually powdered sugar. McQ is then beaten and let go.

McQ is seen throughout the movie driving his Brewster Green 1973 Pontiac Trans Am. This color is unique as it was used only during the 1973 model year. Supposedly, after the movie was filmed, the car was sold to a special forces soldier. He totaled the car one night during a police chase in North Carolina.

Burt Reynolds, Jerry Reed, Sally Field, and Jackie Gleason star in this adventure of two misfit truckers who take on the ultimate challenge. They have to drive from Atlanta, Georgia to Texarkana, Texas in 28 hours to pick up a truckload of Coors beer for a couple of wealthy Texans. If they are successful, they get to share an $80,000 payout. Along the way, they pick up a runaway bride and elude a sheriff who is determined to catch them at all cost.

The film was probably the best advertisement that was ever created for the Pontiac Trans Am. Sales of the pony car hit the roof soon after the movie was released. Today, the black and gold Special Edition Trans Am is still a hot collector’s item and commands a steep price for those in good condition.

Clint Eastwood, Jeff Bridges, and George Kennedy star in this saga about an experienced bank robber and his new sidekick. Clint Eastwood, Thunderbolt, is a bank robber known for his use of a 20-millimeter cannon to break into safes. Jeff Bridges, Lightfoot, is a small-time hood that steals a 1973 Pontiac Trans Am from a local used car lot. Together, they form an alliance along with Thunderbolt’s old bank robbing buddies.

Several muscle cars from the era appear in the film. A 1973 Pontiac Trans Am, which supposedly belonged to Clint Eastwood, is first up. It’s followed by a 1971 Dodge Challenger, 1969 Chevrolet Chevelle, and 1970 Ford Galaxie 500.

Robert Mitchum stars as Lucas Doolin in this black and white film about a Korean War veteran who delivers moonshine for his father. The job is not easy as Lucas has to deal with a local gangster bent on taking control of the business and government agents who want to shut him down. It’s been said that actual moonshiners from the Asheville, North Carolina area were used as extras. Also, Elvis Presley was approached to play the part of Doolin’s brother but was rejected due to his manager’s demand for a hefty salary.

Doolin drives a 1951 Ford coupe souped up with plenty of power to outrun the feds. The car even has a setup that sprays oil on the road to wreck the government agents that chase Doolin during his runs.

Singer/songwriter James Taylor and Beach Boys drummer Dennis Wilson star in this cross-country story revolving around a drag racing drifter and his mechanic as they crisscross the country in search of races. Along the way, they pick up a female hitchhiker who tags along with them during their journey. They also encounter a habitual liar and his 1970 Pontiac GTO Judge. During the course of the movie, an unfriendliness forms between the driver, mechanic and the GTO driver. They decide to race to Washington D.C. and the winner gets possession of the loser’s car. Along the way, they run out of money and stop in Memphis, Tennessee to compete at a local race track. Soon afterwards, the hitchhiker and GTO driver part ways with the racing duo.

Three 1955 Chevrolet Customs were used in the filming of the movie. One of the cars was used for sound effects for the Bandit’s Trans Am in the movie Smokey and the Bandit. Another car was auctioned at the Barrett-Jackson 2015 Scottsdale auction where it fetched $159,500.

Barry Newman and Cleavon Little star in this tale about a car delivery driver and his attempt to deliver a 1970 Dodge Challenger R/T from Denver, Colorado to San Francisco, California. Before embarking on his journey, the driver, known as Kowalski, buys Benzedrine tablets to help him stay awake during the drive. Along the way, Kowalski eludes the police, races the driver of a Jaguar convertible, and resists being held up at gunpoint by a couple of hitchhikers. A radio DJ named of Super Soul monitors police communications and helps Kowalski avoid the boys in blue. At one point, Kowalski even uses an air raid siren and a red light secured to the top of his car to mimic a police cruiser so he can blow through a roadblock. Hold on to your hat for an ending you probably didn’t see coming.

There was a “remake” of the movie in 1997. The storyline varies greatly from the original so much that the only thing the two films share is the movie title.

The drive-in movie theater may be a thing of the past but these great muscle car movie classics continue to thrill a new generation of movie buffs and car lovers. A great movie is timeless and so are great muscle cars. Many of these movies are available on DVD and Blu-ray. Even better news is that most are priced cheaper than admission to a drive-in. So gather your friends and family, throw some Jiffy Pop popcorn on the stove, and catch some of these great classic muscle car movies.