Watching Smokey and the Bandit is possibly the most fun you can have in an hour and 36 minutes. Chances are, you’ve probably watched it more times than you can count. This movie has everything from car chases, crashes, and more buffoonery than you can imagine. But we bet you a case of Coors beer there are several things you didn’t know about the movie. Come with us as we get east bound and down and look at some fun facts about Smokey and the Bandit.

Get Me A Burger!

Jackie Gleason was known for his love of scotch. While on the set, when he wanted a drink, he would tell his assistant to get him a “hamburger”.

A Feeling of Déjà Vu 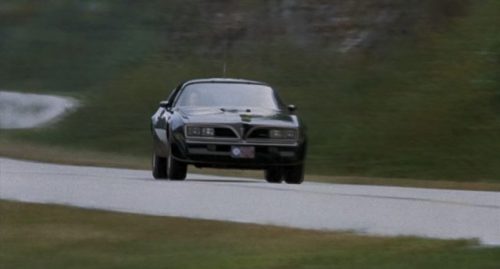 If you think the Bandit’s Pontiac Trans Am doesn’t sound like…well…a Trans Am, you’re not mistaken. The 1955 Chevrolet Custom that was used in Two Lane Blacktop and American Graffiti was actually used for the Trans Am’s sound effects in the movie.

For many of his driving scenes, Jerry Reed wasn’t actually driving the big rig. The truck was loaded on a low-boy flatbed trailer and towed around by another 18-wheeler.

Fred, the Snowman’s Basset Hound, was picked by Burt Reynolds because he did not obey commands very well.

A booster rocket was placed on the Trans Am to help it make the jump over the bridge. This is the same style rocket Evel Knievel used during his attempt to jump the Snake River Canyon.

Smokey and the Bandit was Alfred Hitchcock’s favorite movie. He was known to watch it again and again. 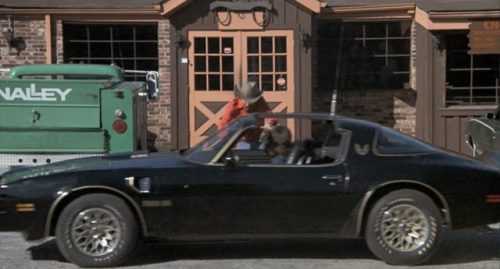 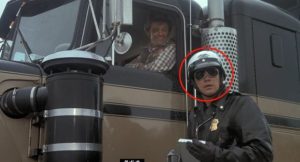 Ben Jones (Cooter), Sonny Shroyer (Enos), and John Schneider (Bo) from The Dukes of Hazzard were used as uncredited extras in the movie. 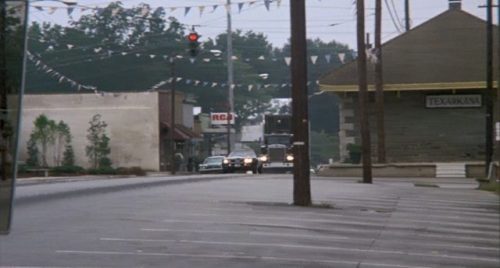 The Bandit and the Snowman actually didn’t drive to Texarkana, Texas to pick the load of Coors beer. The movie was filmed mostly in and around the Atlanta, Georgia area. In fact, Jonesboro, Georgia was used to recreate the city of Texarkana.

Hal Needham, the creator and director of Smokey and the Bandit got the idea for the movie while filming Gator with Burt Reynolds in Georgia. At the time, Needham was Burt’s stunt double in the movie. Word is, Needham and Reynolds liked to drink Coors beer and kept some in their hotel room. To their dismay, the hotel maids would steal the beer while they were away. This is what gave Needham the idea to create a movie about bootlegging Coors beer.

Of all the movies that cashed in on the CB radio craze during the mid-1970s, Smokey and the Bandit is probably the most popular. It was also the second highest grossing movie in 1977, behind Star Wars. It took Burt Reynolds’ career to new heights and catapulted sales of the Pontiac Trans Am practically overnight. And it’s one of those rare movies where the actors appear to really be having a good time during filming. Go dig out your old copy and watch it again!