In this edition of Muscle Car Milestones, we look back at the 1992 – 1993 GMC Typhoon. This compact SUV helped set the stage for the performance SUV segment that would soon gain traction among performance enthusiasts. This pint-sized SUV took what was great about the GMC Syclone pickup and applied that concept to an SUV. The results speak for themselves. Let’s see what make the 1992 – 1993 GMC Typhoon a muscle car milestone.

The first time you see a GMC Typhoon, you might think it’s just some gussied-up GMC Jimmy with a fancy body kit and some racy wheels. Enhancements to the body include a unique front fascia with integrated foglamps and aero bodyside cladding on the doors, fenders, rocker panels, and rear end. But don’t be deceived. That aggressive styling conceals a muscular bravado that you probably didn’t expect from a compact SUV. One that’s ready to take on some of hottest contenders out there.

GMC fitted the Typhoon with a plethora of standard equipment. Climb inside and strap yourself in the leather high-back seats with inflatable lumbar support and six-way power adjustable driver’s seat. Hold on tight to that leather-wrapped four-spoke steering wheel. Once you shift out of park and hit the gas, you’re going to need something to hold on to. The Typhoon also came outfitted with several creature comforts such as air conditioning, tilt wheel, cruise control, power windows, and power door locks. And a 120-mph speedometer lets you know this SUV means business. It’s also been said the gauge cluster came directly from the Pontiac Sunbird GT Turbo.

The heart of the GMC Typhoon is an LB4 4.3-liter V6 with a Mitsubishi TD06-17C turbocharger with 14 psi and a Garrett water-to-air intercooler. This engine was rated at 280 horsepower and 360 lb.-ft. of torque. It was mated exclusively to a 4L60 four-speed automatic transmission with overdrive. Sadly, no manual transmission was ever offered. The Typhoon put the power to the pavement through a full-time all-wheel drive system. A Borg-Warner transfer case managed torque with a 35-percent front and 65-percent rear split. 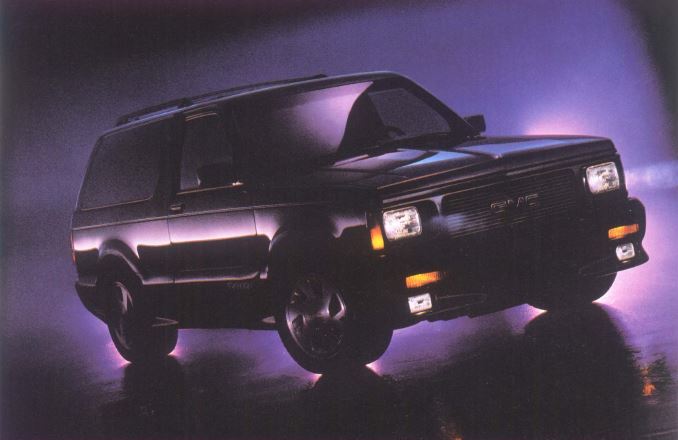 An interesting feature of the Typhoon is electronic level control. This works by maintaining a constant ground clearance no matter how many passengers occupy the cabin or the amount of cargo stored in the rear. A height sensor triggers a compressor to supply or discharge air pressure to or from the rear shocks depending on the amount of pressure on the rear springs.

Was the 1992 – 1993 GMC Typhoon ahead of its time? Possibly. Could you argue that it helped set in motion the performance SUV market that would follow? Maybe. But one thing is for certain. The GMC Typhoon is still regarded as one of the most iconic muscle cars of the 1990s. Horsepower was making a comeback and the GMC Typhoon proved that an SUV could perform as well as some exotics costing twice as much.