Ask any muscle car fan out there and chances are, you’ll hear that 1970 was the landmark year for the muscle car. Horsepower and torque numbers were through the roof and every manufacturer offered something that stood out this model year. Big block power, in particular, was at the forefront of performance this year. And ever automaker brought out something unique this year in order to outdo the competition. Travel back in time with us as we look back 50 years to a year that defined the muscle car. 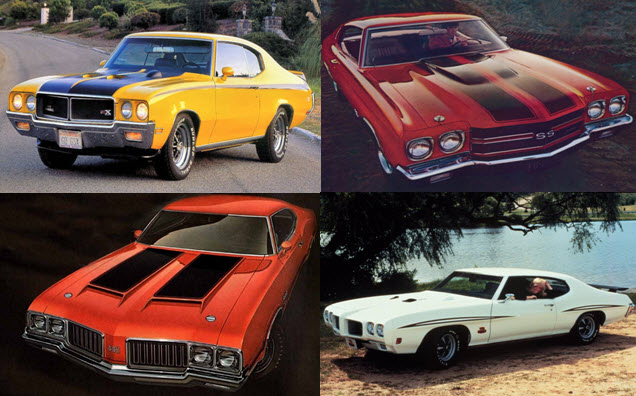 GM finally dropped the edict that mandated engine size couldn’t exceed 400 cubic-inches in the A-body. And the divisions took full advantage of this opportunity by shoehorning some incredible power under the hood. Buick introduced the 455 Stage 1, Oldsmobile touted the W-30 Rocket, Pontiac featured the Ram Air IV in the GTO, and Chevrolet crammed a 454 under the hood of the Chevelle. For some reason, the standout of this bunch always seems to be the Chevrolet Chevelle SS 454 LS6.

The Chevelle SS 454 LS6 was capable of sprinting from 0 to 60 in 6.0 seconds and running the quarter mile in 13.8 seconds. Those times were right up there with the Ford Torino GT and the Plymouth Road 440 Six Pack. Hot Rod magazine knew the Chevelle was special from the get-go and feared its time was growing short. Steve Kelly in the May 1970 issue laments “It could be the last because, even though buyers might still be available after 1971, strict legislation concerning emission outputs, coupled with ascending insurance rates, will render this car – or this type of car – worthless.”

The second generation Chevrolet Camaro and Pontiac Firebird ushered in the new decade with fresh European-inspired styling. Both cars featured a longer nose with a sloping rear and the elimination of the rear side glass. Heavyweights for 1970 include the Camaro SS 396 L78 and the Pontiac Firebird Trans Am Ram Air IV. Both are rare and highly sought out by collectors. Roughly 600 of the Camaro SS 396 L78s left the factory and only 88 Ram Air IV Trans Ams were ever created.

The Ram Air IV Firebird Trans Am was pretty swift for its time. It could run from 0 to 60 in 5.7 seconds and finish the quarter mile in 13.9 seconds at 102 mph. Even today, those numbers are still pretty remarkable. Speaking of numbers, a 1970 Ram Air IV commands in the neighborhood of $200,000 today on the rare occasion one appears on the auction block. 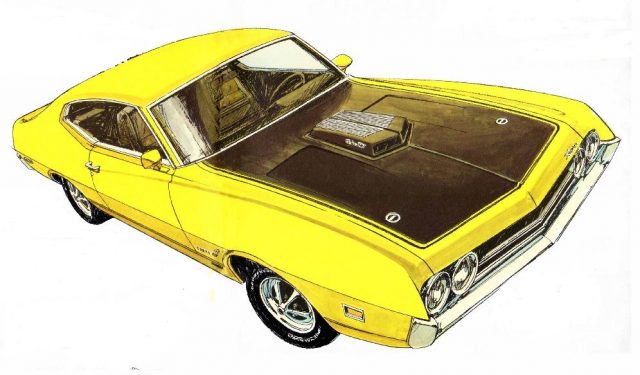 The Blue Oval guys from Dearborn were also serious about performance. One weapon in Ford’s arsenal was the Torino Cobra. The base engine was a 360 horsepower 429 cubic-inch V8. Next up was a 370 horsepower 429 Cobra V8. Buyers that were really serious about performance could opt for the 375 horsepower Cobra Jet Ram Air with Drag Pack. Guys that spent their weekends at the local drag strip took a shine to the Drag Pack. This engine featured an 11.0:1 compression ratio, a high-rise intake manifold, and 700-cfm four-barrel carburetor. It also featured a Traction-Lok differential, engine oil cooler, and forged aluminum pistons. The Drag Pack was a pretty solid performer with quarter mile times in the 13.6 second range.

The Mustang crowd also had plenty of choices this year as well. Standouts include the Boss 302 and the mighty Boss 429. 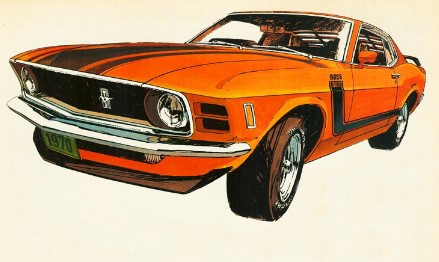 The Boss 302 was a Chevy Camaro Z/28 fighter that came with a 302 cubic-inch V8 small block that was good for 290 horsepower and 290 lb.-ft. of torque. The Boss 302 was unmistakable with its hockey stick side stripes, front spoiler, and matte black hood stripe. Standard performance equipment included a 780-cfm Holley carb, four-speed manual transmission with Hurst shifter, and power front disc brakes. The Boss 302 was good for quarter mile times of around 14.6 seconds.

Steve Kelly from Hot Rod magazine put the Boss to the test and said “The Boss 302 is an exceptionally road-worthy piece of production-line car, again comparing almost straight across with the Z/28. It’s definitely the best handling car Ford has ever built, and that alone makes this car worthwhile.” Steve also praised the Boss 302 for its steering, braking, and ride quality on the street.

The Boss 429 came equipped with a NASCAR-inspired version of the 429 cubic-inch V8. It was conservatively rated at 375 horsepower and 450 lb.-ft. of torque. The Boss 429 could go from 0 to 60 in 7.1 seconds and finish the quarter mile in 14.09 seconds at 103 mph. Though not the fastest pony in the stable, the Boss 429 is still revered by collectors due to its low production numbers and overall collectability. Concours-style restored Bosses can go for around $300,000.

1970 turned out to be a banner year for the boys over at Chrysler. Since releasing the 426 Hemi, Chrysler had become a formidable competitor on the muscle car scene. One of the highlights of the 1970 model year was the Plymouth Hemi ‘Cuda. The ‘Cuda was all-new for 1970 with a completely different body style that shed any resemblance to the Valiant that is was previously based on. Now with the addition of the 426 Hemi, the ‘Cuda became a serious threat to the big block Camaros and Mustangs that had bullied Plymouth’s pony car for quite some time. This powerhouse packed 425 horsepower and 490 lb.-ft. of torque under the hood.

And what a contender the Hemi ‘Cuda proved to be. Cars magazine tested a Hemi ‘Cuda convertible with a TorqueFlite automatic transmission for their May 1970 issue. They walked away with a 0 to 60 of 5.6 seconds and a quarter mile time of 13.45 seconds running 105 miles per hour. Those stats are pretty impressive when you consider the ‘Cuda tips the scales at almost 4,000 pounds.

The 440 Six Pack was available for the first time for the Charger R/T during the 1970 model year. It was a great alternative to those that wanted more performance than the standard 440 Magnum but didn’t want to spend the moola the 426 Hemi commanded. The Six Pack was rated at 390 horsepower and 490 lb.-ft. of torque. Dodge supposedly built fewer than 350 Chargers R/Ts with the 440 Six Pack. 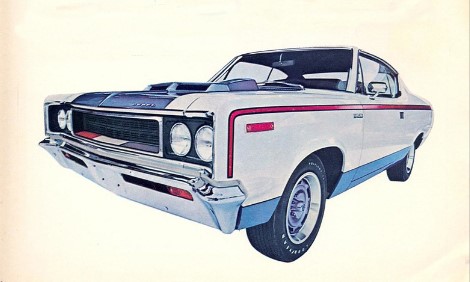 Not to be outdone by the Big Three, AMC offered buyers several exciting choices for those wanting something other than a GTO or a Torino. One of these contenders was the Rebel Machine. Most of these were offered in white with a red stripe and blue body accents on the lower body and hood. Under the hood lurked a 390 cubic-inch V8 with 340 horsepower and a massive 430 lb.-ft. of torque. Motor Trend tested the Rebel Machine for their November 1970 issue. The magazine pushed the Rebel Machine from 0 to 60 in 6.4 seconds and ran the quarter mile in 14.4 seconds at 99 mph. Seems the guys at the periodical really liked the Rebel Machine stating “For a price below $3500, The Machine performs like a champ, both in straight-out acceleration and excellent handling”.

Another noteworthy AMC was the Javelin SST Mark Donohue edition. Donohue was a famous Trans Am series racer who moved from Chevrolet to AMC in 1970. AMC celebrated his association by introducing a special edition Javelin in his name. The Donohue edition came standard with dual exhaust, front disc brakes, and a ram air induction system. Also, one of the distinguishing features of this special edition was a spoiler designed by Donohue.

It seems performance became a dirty word after the 1970 model year. With Uncle Sam cracking down on car emissions and insurance companies jacking up rates on muscle cars, it was only a matter of time before performance began to suffer. In less than five years, the GTO, ‘Cuda, and many other muscle machines that had dominated the street and strip had disappeared. It would be almost two decades before the muscle car would return. 1970 may seem like a lifetime ago, but it still lives on in the heart of those that lived that golden year of the muscle car.