NASCAR homologation rules dictate that in order for a car to race on the track, street versions of the car have to be made available to the buying public. And typically, a certain number, usually 500, have to be produced. With that in mind, 505 Dodge Daytonas were crafted to satisfy NASCAR’s homologation mandate.

Creative Industries of Detroit, Michigan was tasked with taking Dodge Charger R/Ts and converting them into the Dodge Daytona. For starters, the transformation made the front fenders and hood somewhat longer and slope lower in the front. An 18-inch nose cone features a lower front air intake and pop-up headlamps. Larger wheel openings help accommodate larger tires. To help cheat the wind, windshield mouldings are flush like the windshield used on the Charger 500. The rear window was also made flush as opposed to the Charger’s flying buttress design. Of course, the Daytona’s most captivating feature was its 58-inch-wide rear wing. It stood two feet above the decklid and provided downforce to the rear wheels and lateral stabilization.

So why was is the Daytona’s rear wing so enormous? For years, it’s been believed the reason was simple — so the trunk lid could be opened. Dodge Daytona expert Steve Lehto set the record straight in a Road and Track article back in June 2016. Steve spoke with John Pointer, who was a rocket scientist from Chrysler’s missile division. John was tasked with making the Daytona faster and was given carte blanche to make it happen. John devised the Daytona’s rear wing as well as the car’s nose cone in order to make the Daytona more competitive in NASCAR. In fact, John spent a considerable amount of time at the Chelsea Proving Grounds honing the rear wing. When asked if the wing’s height had anything to do with being able to open the trunk, Pointer debunked that myth. 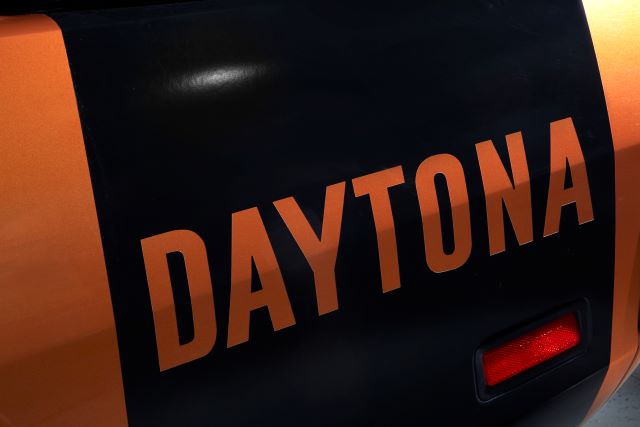 Need another reason why the 1969 Dodge Daytona is worth remembering? Well, it was the first car to break the 200-mph barrier on a closed course by NASCAR driver Buddy Baker. Buddy achieved a speed of 200.447 mph during a sequence of engineering tests on transmission durability at Alabama International Motor Speedway on March 24, 1970.

The Daytona’s wasn’t as successful in capturing the checkered flag as its Plymouth Superbird stablemate. The Daytona only won two races during the 1969 season and four races during 1970.

Prices for the 1969 Dodge Daytona are about what you would expect to pay for a car this rare. At the 2022 Mecum Kissimmee auction, a red 440 Magnum-powered Daytona produced for the Canadian market and with the Charger Special Edition Package hammered for $308,000. Mecum also auctioned a Hemi-equipped Dodge Daytona during its 2015 Kissimmee auction for an auction record selling price of $900,000. David Spade of Joe Dirt fame, was the winner of this coveted Dodge Daytona. You might remember that Spade drove a dilapidated Dodge Daytona in the movie and apparently wanted a nice one for himself. This Daytona was previously owned by famed muscle car owner Otis Chandler and noted Mopar enthusiast Tim Wellborn.

When NASCAR banned aero cars with engines larger than 305 cubic-inches, the Dodge Daytona’s days were numbered. NASCAR deemed these aero cars had an unfair advantage on the track and severely limited their displacement for the 1971 racing season. Fifty years later, the 1969 Dodge Daytona, along with the other aero warriors, are sought out by collectors who remember these track stars from their heyday. NASCAR and racing haven’t been the same since these racing legends were banned from the track.