You knew it was bound to happen. After much speculation and internet chit chat, Dodge finally introduces the 2021 Dodge Durango SRT Hellcat. It stands to be the most powerful [...]

The 2019 Dodge Durango SRT is the latest addition to the Horsepower Garage. Since it was introduced in late 2017, it’s been on our radar. There aren’t many American-made [...]

The High Octane Edition is the latest special edition available for the 2019 Dodge Challenger SRT Hellcat. Buyers can choose between Pitch Black or White Knuckle paint that [...] 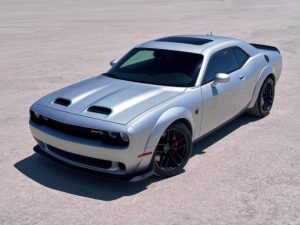 Dodge unleashes the most powerful Hellcat Challenger yet! With 797 horsepower and 707 lb.-ft. of torque, the Challenger Hellcat Red Eye is now the quickest production muscle [...]

The Dodge SRT lineup will soon add another member to its distinguished roster. This time around, it’s an SUV packing plenty of attitude and charisma with room for all your [...]

All hell is set to break loose this April in New York City. That’s when Dodge unleashes its most powerful muscle car ever. Get ready for the 2018 Dodge Challenger SRT [...]