In this edition of Muscle Car Milestones, we’ll take a look at the 1968-1970 Plymouth Road Runner. Inspired by the famous Warner Brothers cartoon character, the Road Runner was one of the so-called “budget” muscle cars born in the late 1960s. The premise of the Road Runner was simple. Build a muscle car with few frills that the average Joe could afford, give it some performance equipment, and watch sales take flight. Stay with us as we take a look and see what made this low-budget brawler a muscle car icon.

“The Hemi Road Runner was an easy first choice, not so much because of the Road Runner as the Hemi engine and everything that goes with it. To say the Road Runner scored heavily in the performance part of the test is Anglo Saxon understatement in the best tradition. It was the quickest in acceleration, stopped in the shortest distance and ranked second in handling. That is a pretty tough record.” Car and Driver, January 1969

Toward the end of the 1960s, muscle cars were starting to become downright expensive. All the add-ons and fancy bells and whistles available were starting to become a pain in the buyer’s wallet. With that in mind, Plymouth decided it was time to get back to basics and create an affordable muscle car. A car that focused on performance and not the superfluous creature comforts that jacked up the price. 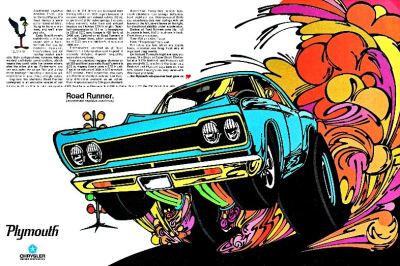 Road Runners were based on the Belvedere and came available as a pillared or hardtop coupe. Outside, the Road Runner was all business and featured hood scoops, a blacked-out grille, and Road Runner cartoon badging. Interiors were pretty utilitarian and came equipped with a bench seat, floor shifter, and a basic horn ring steering wheel. In fact, the interior was so austere that some magazine reviews compared it to a taxi cab and an army truck. The good news is that an optional vinyl interior was available which helped somewhat with cleaning up the drab look. Of course, the most notable feature of the Road Runner was the “beep beep” horn. And just because the Road Runner was a car built for the budget-minded didn’t mean Plymouth skimped on options. Drivers could get accessories such as cruise control, power windows, and an 8-track stereo. 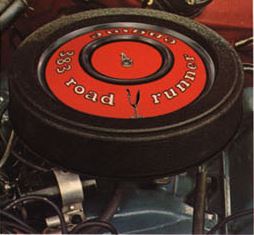 Where the Road Runner truly shines is underneath the hood. The Road Runner was outfitted with a special version of the 383 cubic-inch V8. The 383 used heads from the GTX due to their massive intake and exhaust valves, 3.2 square inch ports, and stiffer valve springs. The cam, intake manifold, valve train, and exhaust headers were also pulled from the GTX. This powerplant pumps out 335 horsepower and 425 foot pounds of torque. With a little tweaking, this engine was good for 0 to 60 times of 6.6 to 7.1 seconds.

Drivers who wanted even more muscle could drive away from their dealer with the 426 Hemi. This engine featured forged aluminum pistons, cast-iron cylinder heads, and a high-performance fuel pump. Boasting a muscular 425 horsepower and 490 foot pounds of torque, this engine gave the Road Runner exactly what it needed to outpace the Goats and Mustangs it encountered on the road. 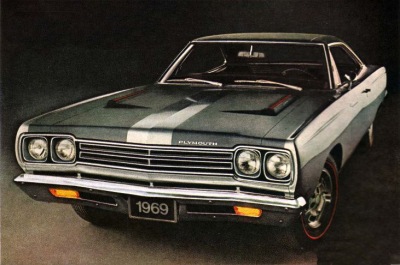 Plymouth made a few changes to the Road Runner’s look for 1969. The Road Runner received a new grille, tail lamps, and rectangular side markers. Even the Road Runner decal on the deck lid and doors was new. A convertible was finally offered and roughly 2,100 customers opted for the drop top. The big news for 1969 was the mid-year addition of the 440 Six Barrel engine. By checking off option code A12, buyers got an engine producing 390 horsepower and 390 foot pounds of torque. The 440 came outfitted with a host of performance parts including three Holley 2300-series carbs and an Edelbrock intake manifold. Road Runners equipped with the 440 can be easily identified because of their 15-inch gloss black steel wheels with redline tires. The most prominent feature included with the 440 package was a black fiberglass lift-off hood with scoop. These definitely gave the car a menacing look which is not a bad thing. This Road Runner was conceived for the drag strip and packed quite a punch. The 440 was rated at 390 horsepower and 390 foot pounds of torque. A really nice touch for the Road Runner was the Air Grabber hood scoop. Activated by a lever under the dash, this fed air directly into the engine via twin scoops on the hood.

The Road Runner was a favorite with several auto enthusiast magazines. Motor Trend liked the 1969 Road Runner so much they graced it with their “Car of the Year” award. Car and Driver took several muscle cars from 1969 and pitted them against one another in a classic knock-down, drag-out. These heavy hitters include the Chevrolet Chevelle SS 396, Dodge Super Bee, Ford Fairlane Cobra, Mercury Cyclone CJ, and the Pontiac GTO Judge. After the smoke cleared and the dust settled, one car reigned supreme. Yep, it was the Hemi Road Runner. From 0-60, the Road Runner beat the second fastest car by 0.4 seconds. In the quarter mile, it beat the second fastest by 0.40 seconds. Just like the coyote, it seems like nothing could catch the Road Runner.

1970 would once again bring change to the Road Runner. The exterior featured new sheet metal that included a new grille, fenders, hood, and quarter panels. Inside, the Road Runner could be ordered with upscale amenities such as bucket seats, console, and tachometer. An interesting option was the iconic road runner decal that could be ordered featuring a dust trail that stretched from the front fender all the way to the rear quarter. 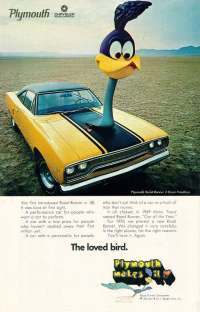 Engine options were the same as 1969. A 3-speed manual transmission was standard issue and the 4-speed automatic was relegated to option status. The TorqueFlite automatic transmission was also still available. The Air Grabber option was redesigned for 1970 and featured a popup hood scoop activated by a switch under the dash. It featured a shark graphic with “Air Grabber” lettering in the mouth. 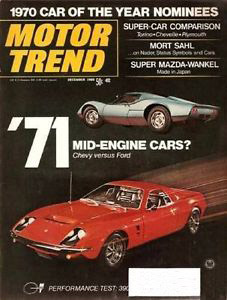 Once again, car magazines loved getting their hands on a Road Runner for flogging. For their December 1969 issue, Motor Trend put the Road Runner 440-6 up against the Chevrolet Chevelle SS 454 and the Torino Cobra. From 0 to 60, the Road Runner fell 0.6 seconds behind the Bowtie and Blue Oval and finished second in the quarter mile sprint.

Plymouth’s succeeded in its mission to create an affordable muscle car. In its first three years, Plymouth sold approximately 170,000 Road Runners. Today, a Hemi Road Runner in excellent condition can cost well over $100,000. There’s nothing cartoonish about that but that’s the price you pay for nostalgia and rarity in today’s muscle car market.