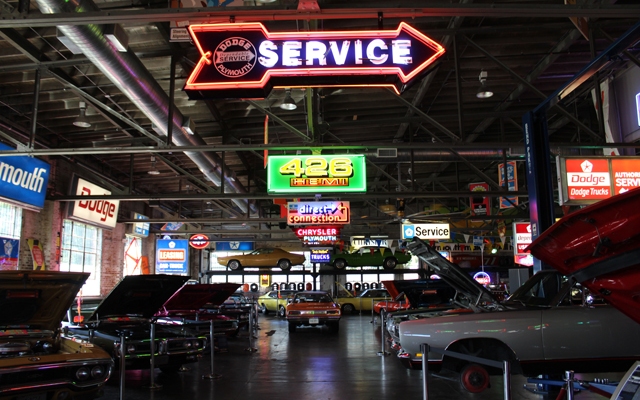 Deep in the heart of central Alabama is one of the greatest muscle car collections around. Alexander City, Alabama is home to the Wellborn Musclecar Museum. Tim Wellborn is one of the country’s renowned Mopar collectors and his assortment of Dodge and Plymouth muscle is one of the best you’ll see anywhere. This was our third trek to the museum since it opened back in 2010. 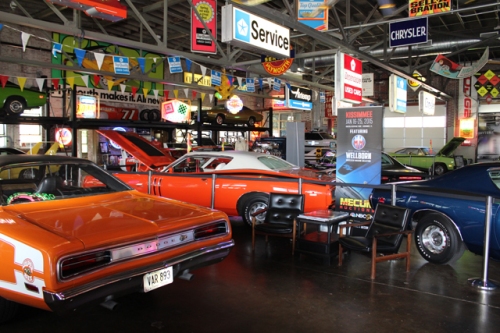 Step inside the museum and you’re instantly transported back to a time when Hemi ‘cudas and Road Runners graced the dealer showroom floor for the first time. Your mind wanders back to a time when you worked after school to save up to buy that Dark Burnt Orange Charger that you always wanted. Or the nights you spent with your girlfriend in your old man’s Challenger convertible catching a double feature at the Moonlight Drive-In.

Take a peek inside the parts department and marvel at the museum’s NOS parts and accessories needed to keep the cars running like new. When a car needs service, they don’t just use any parts for repair. They use genuine replacement parts that a dealership repair shop would have used when the car was new. Talk about keeping it real! 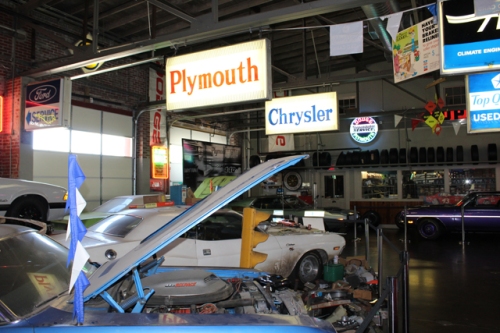 Not only does the museum house some of the finest and rarest Mopar muscle cars, it features classic Chrysler, Dodge and Plymouth signage as well as neon lighting that lit up showroom floors during the 1960s and 1970s. Seeing the neon light’s glow on the shiny cars truly adds to the museum’s nostalgic atmosphere.

That thing got a Hemi? You better believe it! Check out this pair of red Hemi ‘cudas. These days, seeing a Hemi ‘cuda is a rare treat since they are so rare. Tim’s and his brother Curtis actually owned the 1970 ‘cuda several years ago and sold it. It’s back in the family after being away almost 30 years. Tim’s winning bid of $185,000 at Mecum’s 2015 Indianapolis auction earlier this year brought the car back home to Alexander City. It’s a 4-speed car with about 40,000 miles on the odometer. The 1971 model features a console-shifted automatic transmission and bucket seats. It’s stunning with its black vinyl top, louvered rear window, and Goodyear Polyglas tires.

Tim is known for his fondness for 1971 Dodge Chargers. We counted no less than five at the museum the day we were there. Check out this stunning red beauty equipped with the 426 Hemi and rare sunroof. These aren’t too common since the sunroof option cost around $485. This car was offered for auction earlier this year at Mecum’s Kissimmee, Florida auction and failed to meet the reserve. A high bid of $275,000 wasn’t quite enough to take this beauty home. 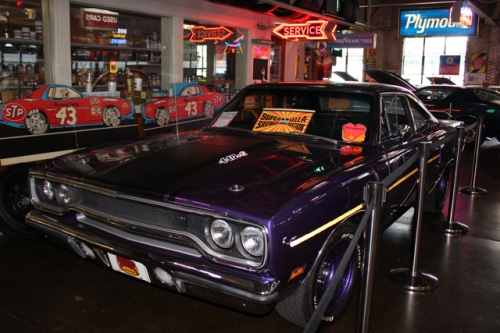 This 1970 Road Runner is quite the eye-catcher. It’s decked out in purple with a blacked-out hood and Road Runner pin striping running the length of the car. And check out that six pack…the 440 Six Pack, that is! This car was born to fly and looks fast just sitting still. Even though the Road Runner was Plymouth’s budget muscle car, this one sports several options such as bucket seats and center console. 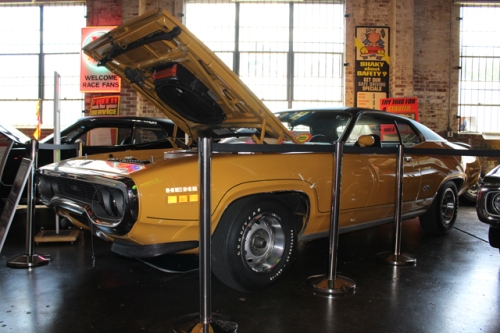 Here is a truly special 1971 Plymouth GTX. This Bahama Yellow coupe has the distinction of having the highest-ever sticker price of any Chrysler muscle car during the classic muscle car era. When new, the sticker price for this beauty was a whopping $6,592.75. It was ordered as a sales bank car in late 1970 with a staggering list of options including power windows, AM/FM cassette with microphone, and power steering. It looks as fresh as the day it was built. It’s as if it was brought to present day through a time machine. This car alone is reason enough to come visit the museum. It was previously owned by a highly-decorated Viet Nam war veteran who truly loved this car.

The museum also has a couple of unrestored barn finds. This blue 1971 Challenger R/T 440 Six Pack was discovered in a barn near Cleveland, Ohio. It was in deep slumber for over 30 years until its awakening in 2008. It’s still covered with decades of dust and grime but appears to be in decent shape. Amazingly, it still has its original tires, belts, and hoses. What a find!

This 1970 Road Runner was a barn find in Texas. And in case you’re wondering, yes, that’s the numbers-matching 426 Hemi under the hood. This car belonged to a judge who raced it before his time on the bench. Even though the exterior shows its age, the white interior still looks quite clean and preserved.

Watch out for this guy lurking around the museum. We caught him hanging around the Road Runners (go figure!) quite a bit during our visit. He didn’t have much to say and pretty much kept to himself.

If Mopar muscle is your passion, you owe it to yourself to check out the Wellborn Musclecar Museum. The people who run the place are super friendly and love to tell stories about the cars. But be warned, you might want to grab lunch at the Sonic next door before you go. It’s really easy to lose track of time once you’re there and checking out all the museum has to offer works up quite an appetite.

For more information about this awesome museum, head over to wellbornmuseum.squarespace.com.