The Ford Motor Company created some of the most memorable muscle cars during the classic muscle car era. Cars like the Mustang, Torino, and Mercury Cougar are some of the most renowned muscle cars from the 1960s. The popular “Win on Sunday, Sell on Monday” axiom is believed to have been started by a popular Ford dealer, referring to the brand’s dominance at the drag strip and track. And let’s not forget Carroll Shelby’s contribution to Ford. Cars like the Shelby GT350 and GT500 are still some of the most revered muscle ever created. Cars that still command hefty prices when they roll across the Mecum and Barrett-Jackson auction floor.

The following is a few of our favorite classic Ford muscle cars that get our blood pumping every time we see one.

The Ford Galaxie was the perfect platform for Ford’s 406 and 427 cubic-inch high performance engines. The Galaxie was loved by the local drag racers and the boys tearing up the NASCAR tracks. Who could blame them? This 405 horsepower beast could run with the best of them. The Galaxie could charge the quarter mile in just a little over 15 seconds. A lightweight fastback was offered in 1963 that featured weight-saving fiberglass doors, hood, and front fenders. This wolf in sheep’s clothing was created for drag racing and could run the quarter in 12.5 seconds.

Hot tip: Good luck finding a 1963 Galaxie lightweight. Only 212 were ever built.

In order to compete on the drag strip with Dodge’s Hemi cars and Pontiac’s Catalina Super Duty, Ford concocted the Thunderbolt. The idea was pretty simple. Stuff a 425 horsepower 427 cubic-inch engine under the hood, get rid of dead weight, and give the buyer a choice between an automatic or manual transmission. Thunderbolts are easily identified by their high-rise hood and unique “high beam” air intakes. The Thunderbolt was quite a terror on the strip. Thunderbolts racked up several trophies and awards including the 1964 NHRA Super Stock title and gave Ford the 1964 NHRA Manufacturers Cup.

Hot tip: Less than 100 Thunderbolts were built so expect high prices at auction or in the classifieds.

The Ford GT40 got its name by combining Grand Touring (GT) with the car’s height of 40 inches. Henry Ford II ordered the creation of the GT40 in order to beat Ferrari in endurance racing. The GT40 was quite a successful racer, winning the prestigious 24 Hours of Le Mans four times between 1966 and 1969. It also won four FIA titles between 1966 and 1968.

Hot tip:  The GT MkIV is commonly found on display at the Henry Ford Museum in Detroit, Michigan. 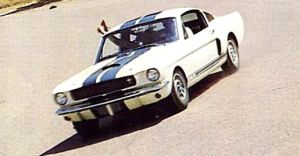 In 1966, Shelby American stated the GT350 was the fastest production American stock car on the road. That seems to be a fact since the scrappy Shelby GT350 could run from 0 to 60 in a scant 5.7 seconds. The GT350 was powered by a souped-up K-Code 289 V8 producing 306 horsepower.  Ford partnered with Shelby to create the GT350 to beat the Corvette in SCCA B-production racing. Shelby also built a race-ready version of the GT350 called the GT350R. These were not street legal and only 36 were created. The 1965 GT350R was a successful racer and won the SCCA B-production national championship from 1965 to 1967.

The “KR” stood for King of the Road. There’s little doubt the GT500KR was anything but king back in 1968. Under the hood lurks a Cobra Jet 428 cubic-inch V8 rated at a conservative 335 horsepower. However, actual horsepower numbers are northward of 400 with torque around 440 foot pounds. The GT500KR was capable of 0 to 60 times around 6.9 seconds with quarter mile sprints in the 14.04 second range. The GT500KR featured a somewhat upscale interior with niceties such as bucket seats and woodgrain on the dash, console, and doors.

Hot tip:  The Shelby GT500KR was only produced for the 1968 model year so expect prices to reflect its scarcity. 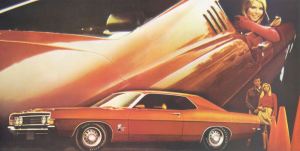 This is one snake you don’t want to mess with. The 1969 Torino Cobra came ready to strike with a standard 428 cubic-inch V8 spewing 335 horsepower. Standard equipment also included a four-speed manual transmission, heavy-duty suspension, and a large diameter front stabilizer bar. Drivers wanting some extra bite could opt for the 428 Cobra Jet Ram-Air V8. Buyers also had a choice between a two-door hardtop as well as a SportsRoof hatchback model. Torino Cobras were known to thrash the quarter mile between 6.3 to 7.8 seconds.

Hot tip: Another one-year only hot rod from Ford with something of a cult following.

The Cyclone CJ featured a 335 horsepower 428 cubic-inch V8 with Ram Air. This fastback was no slouch at the strip. Equipped with an automatic transmission, the Cyclone CJ could sprint from 0 to 60 in 6.6 seconds and dash the quarter mile in 14.05 seconds. The Cyclone CJ was quite the looker, too. The fastback styling gave the car a sleek, aggressive stance. And with the Sport Appearance option, drivers got bucket seats, racing mirrors, and turbine wheel covers.

Hot tip: Seeing a Cyclone CJ is a treat since this is one of Mercury’s rarest muscle cars.

It’s no surprise the Boss 302 had a secret weapon lurking underneath its blacked-out hood. Ford installed a special version of the 302 cubic-inch V8 that featured cylinder heads with high turbulence polyangle wedge combustion chambers. It also featured canted valves, a forged steel crankshaft, and a 780 cfm Holley carburetor. This high performance street machine was bred for racing and could go from 0 to 60 in just under 7 seconds. Car and Driver loved it so much they proclaimed it was the best Mustang ever.

One of the great things about the Mercury Cougar Eliminator is the wide range of engine choices. The base engine for 1969 was a 351 Windsor good for 290 horsepower. For a little more oomph, drivers could order the S-code 390 spitting out 320 horsepower. For those who were really serious about performance, a 428 Cobra Jet packing 335 horsepower was the engine of choice. It should also be noted that the Boss 302 was made available late in the model year. Engine choices for 1970 were essentially the same except for the deletion of the 390 from the options list.

The 1970 Ford Torino Cobra was a slick fastback that could give the Charger and GTO some serious grief. Torino Cobras are easily identified by their blacked-out hood and grille. In Super Cobra Jet form, the Cobra could go from 0 to 60 in just 5.8 seconds. With 375 horses under the hood, this snake could also lay waste to the quarter mile in only 14 seconds. With numbers this impressive, it’s no wonder the guy in the GTO only sees the Torino Cobra’s taillights.